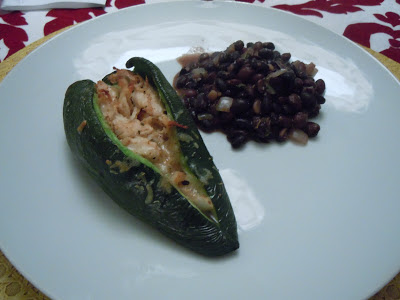 Leftovers can be really annoying. Since I haven’t fully mastered the art of cooking for a family of 2 instead of 5, leftovers are a part of my life. Sometimes, I bring them to work for lunch, which is pretty boring. Usually, I try transform them into something else. Otherwise, I would end up throwing away a lot of food, and then I would feel guilty. It’s a real problem.

How do leftovers affect today’s recipe, you might ask? Only minimally. Basically, I roasted a few huge chicken breasts the other day and had a bunch of chicken left. I figured I would use the leftover chicken in tacos, the world’s #1 best leftover idea ever (according to me), which required just about no time, thought, or energy. My husband, Diran, had a better idea: let’s stuff the chicken into peppers. We had two poblano peppers for some reason that I’m not really sure of (not a big fridge staple), so we decided to keep the Mexican theme going and used the peppers instead of tortillas. It was, in a word, genius. It was, in another few words, very easy.

If you don’t have poblano peppers, you can use another pepper (bell peppers, Italian peppers, etc). The poblano has a little bit of heat  to it that works really well with this filling, but it would taste just fine using another pepper instead. You can use a different leftover meat instead of the chicken, or omit the chicken and use just cheese. Either way, these would still be tasty.

Today, I’m experimenting with a new format. I’ll put the whole recipe at the bottom of this post so you can print it out without having to include all of the pictures. Otherwise, enjoy the visual aid leading you to this recipe, and let me know what you think of the new format.


Start with shredded chicken and cheese. 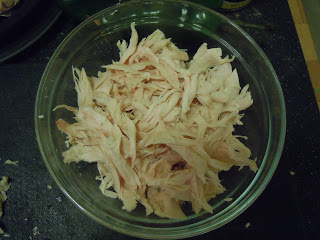 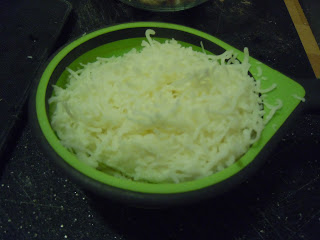 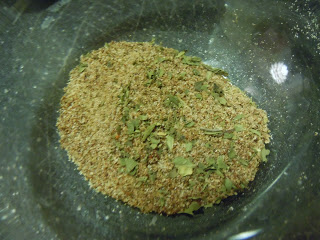 Then, dice some onion. 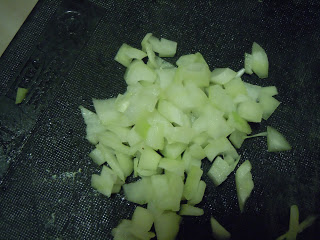 Mix everything together in a bowl. 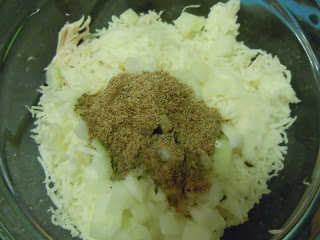 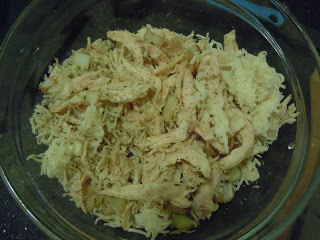 Make a lengthwise slit in the pepper. Carefully use your hand to remove the seeds and the tough inside part of the stem from the pepper. Fill each of the peppers with the chicken mixture. 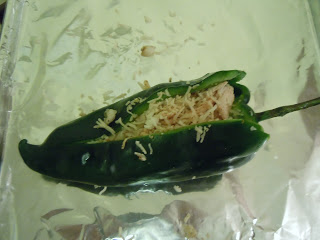 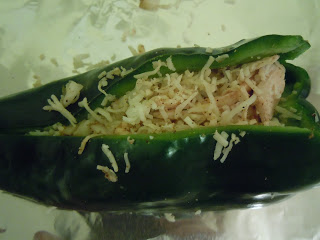 Bake until the pepper is somewhat cooked through, and the cheese is melted and gooey (and delicious). 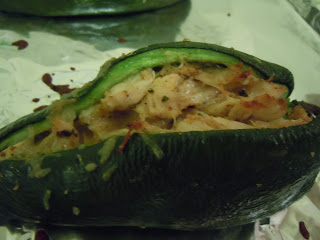 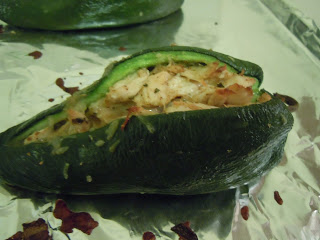 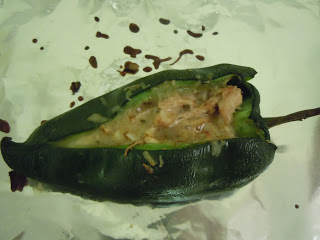 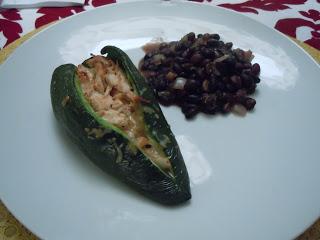 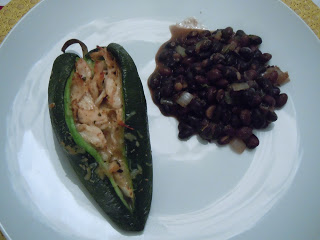 Top with salsa (I like salsa verde) and sour cream.

Preheat the oven to 350 degrees.

Mix the chicken, cheese, onion, and spices in a medium-sized bowl.

Make an lengthwise incision in the peppers. Remove the seeds (wash your hands before touching your eyes!). Stuff each pepper with the about half of the chicken mixture. Place the peppers seam-side up on a baking sheet. Bake for about 20 minutes, or until the peppers have become more tender and the cheese has melted (you can bake for longer if you want a more tender pepper). Top with salsa and sour cream.