Vegan Cauliflower Corn Chowder is a creamy, comforting chowder that will have you wondering where the cream is.

Summer weather has started creeping in on us in New England. I just had my first clam chowder of the season, and for a moment forgot what was going on in the world. When my daughter saw how much I loved it, she asked for a taste. It was love at first bite! She finished a few more spoonfuls, and then asked me to make the same thing tomorrow.

Since clam chowder requires a bunch of ingredients I don’t have at home, I opted to make a lighter, vegetarian version instead. I’ll admit–this tastes nothing like clams, but it is creamy and rich without much guilt.

When I served this soup, my daughter, who insisted numerous times that I make chowder for dinner, ate one bite. My son, the bigger critic, finished his entire bowl and declared that he would have leftovers for dinner tomorrow. Which child eats which food has truly become one of life’s great mysteries.

But back to the chowder:

What makes it creamy?

It’s really mostly cauliflower. Pureed cauliflower gives a great “white” base to the soup. Additionally, a bit of plant-based cream (or real cream, if you want), smooth it out and make the sauce velvety and smooth.

What is kombu and why do I need it?

Kombu is dried seaweed, and is used as a base for some Japanese soups. I bought it to add a little extra umami flavor to broths, and threw it in here to try it out. It was so yummy! If you don’t have kombu, just omit it. You could substitute a little miso paste (a really small amount), or even a dash or two of soy sauce.

Can I make substitutions?

Sure (have I ever said no?). Try more corn, less corn, more potatoes, less potatoes. You could chop up some canned jackfruit and throw it in to simulate clams, if you’re so inclined. You can add more water to thin it out, or use less to make the soup a little thicker.

How many people does this feed? 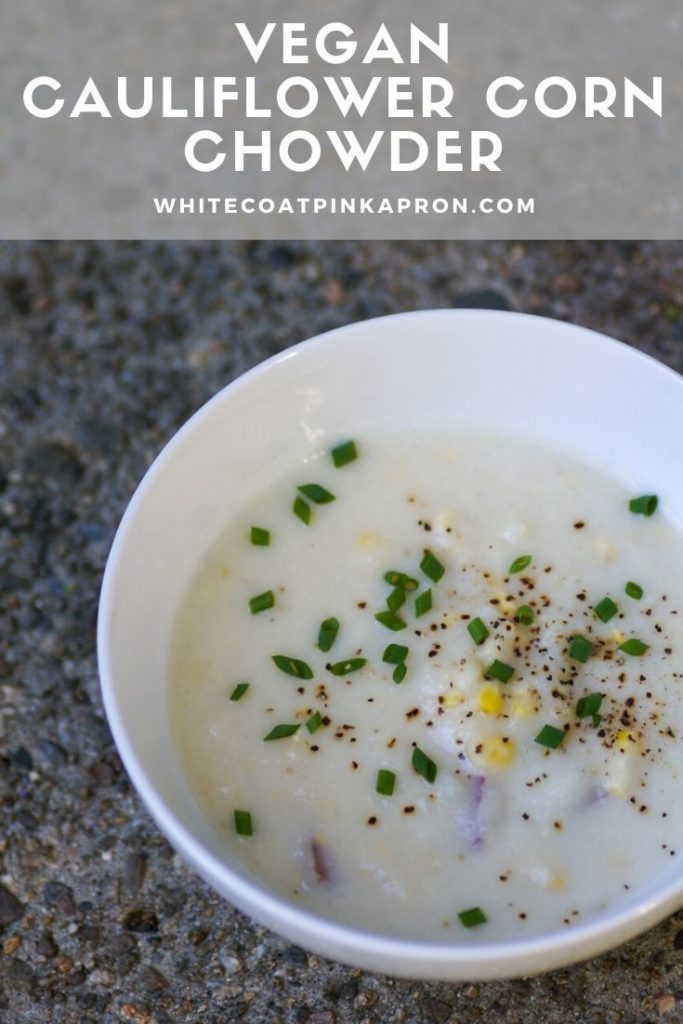 This recipe is very forgiving; you can really adjust the amount of cauliflower, liquid, corn, and potatoes to suit your liking. You can use half and half or cream, but it won't be vegan.