This is the slow cooker recipe you’ve been waiting for! Okay, maybe that’s a bold statement considering I don’t even know who is reading this, but just go with it. As we all probably know, weekends are good slow cooking days. For people who work all week (everyone), you probably spend at least part of the weekend at home, getting things done around the house. Boring, but necessary. It’s easy to start the slow cooker mid-morning and to have a nice, fully prepared dinner with minimal effort by the time you’re hungry. In addition to loving the slow cooker, I also love cooking in bulk on the weekends so I don’t have to cook as much during the week. So, that’s what I did today. Oh, and I’m watching Gilmore Girls on Netflix right now. Overall, today was a productive day.

Maybe you’ve heard of tomatillos but you’ve never cooked with them. Maybe you’ve never even seen them before. Though they look like green tomatoes, they don’t taste like them. They’re a little tart, and seem to be the main ingredient in green salsas. I promise, you’ll like them. If you live in the Boston area, you can buy them at Russo’s in Watertown ($0.98/lb–not bad!). You can probably get them at Whole Foods or another specialty store if you live somewhere else. The rest of the ingredients are pretty straightforward. If you can’t find tomatillos, there really isn’t a good substitute. But, you could probably buy Trader Joe’s Salsa Verde (which, by the way, is SO GOOD) and use that instead of the sauce here. I bet it would be really good.

Once you make this chicken, the possibilities are almost endless. You can use the chicken in tacos or burritos (what we did tonight), in enchiladas (what we will do later this week, probably), in chili, or even just eat it on its own. The flavors are really so good that I don’t think you’ll mind eating it twice in one week! If you don’t believe me, you can always freeze the leftovers and eat them another time.

If you feel like making this on a weekday, do some prep ahead of time. You can make the sauce the night before, and then keep it in the fridge. The day you want to make it, put the sauce and chicken in the slow cooker, turn it on, and you’re done. The active prep time for this recipe is really very minimal, so give it a try! 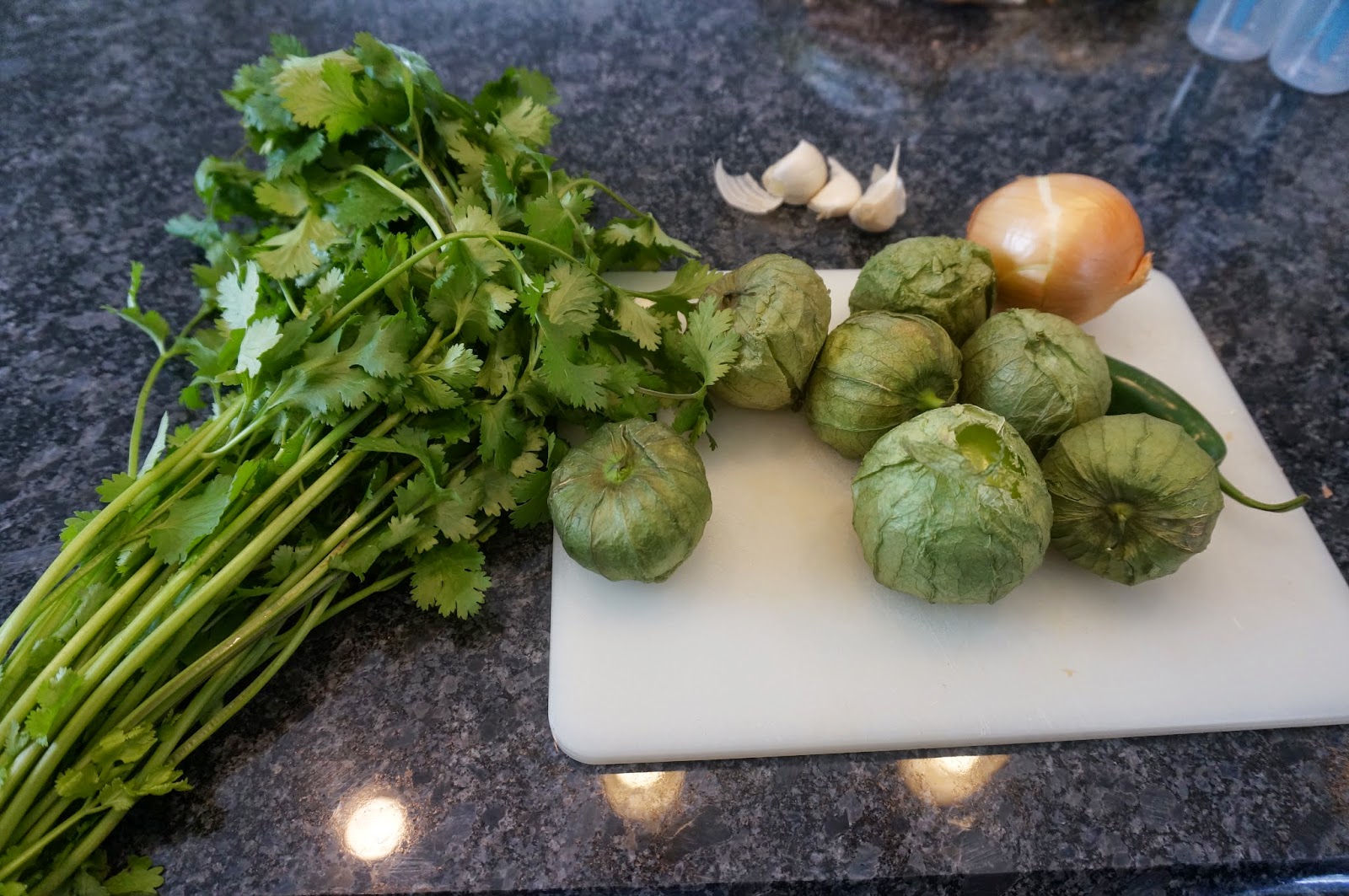 Tomatillos are basically these green looking tomatoes covered in a papery coating. Peel off the paper (it’s a little sticky), and throw it out. 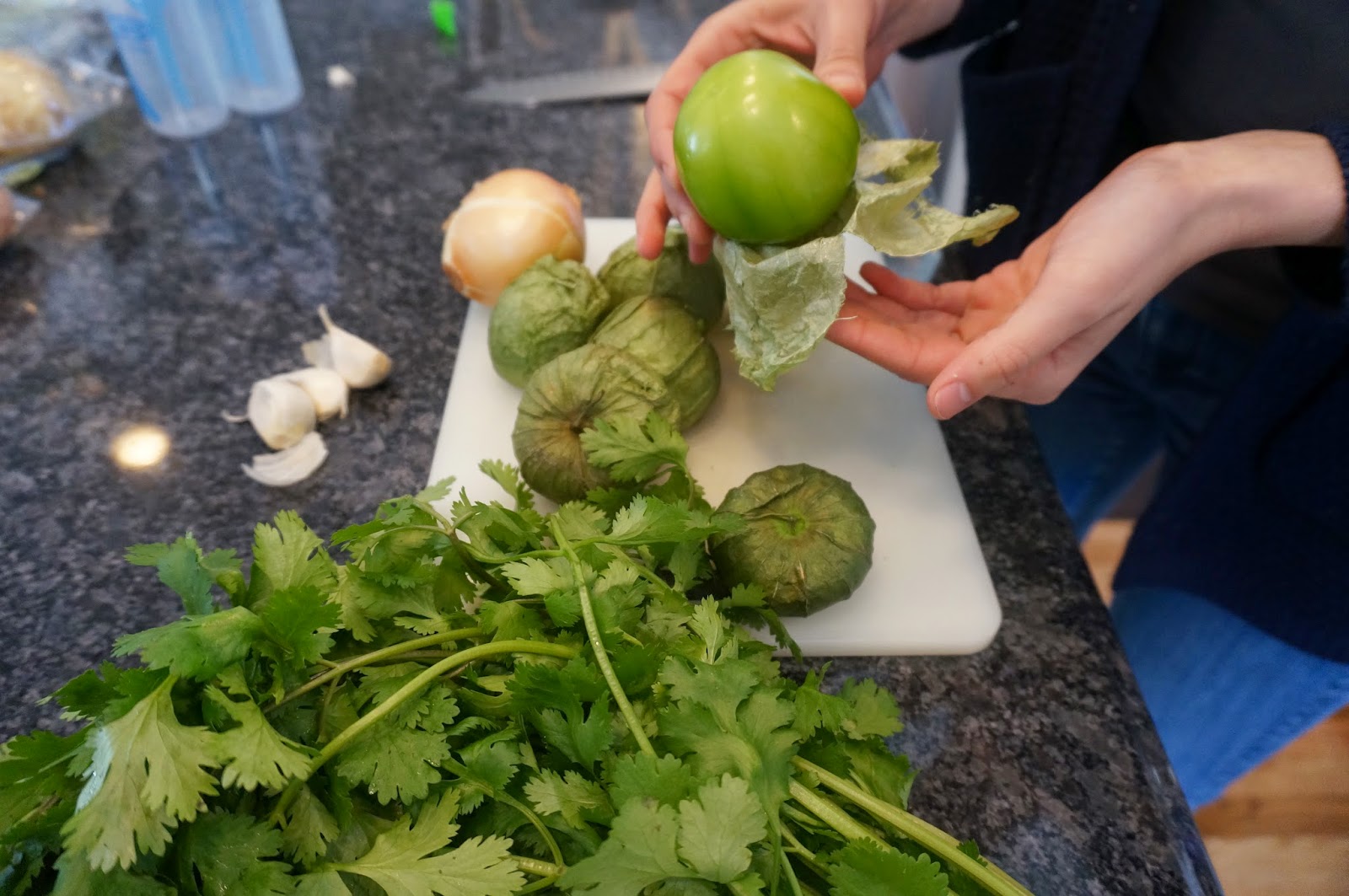 Cut the tomatillos in half. Note that they do not look much like tomatoes inside. That’s because they’re actually relatives of gooseberries, and not tomatoes. Science. 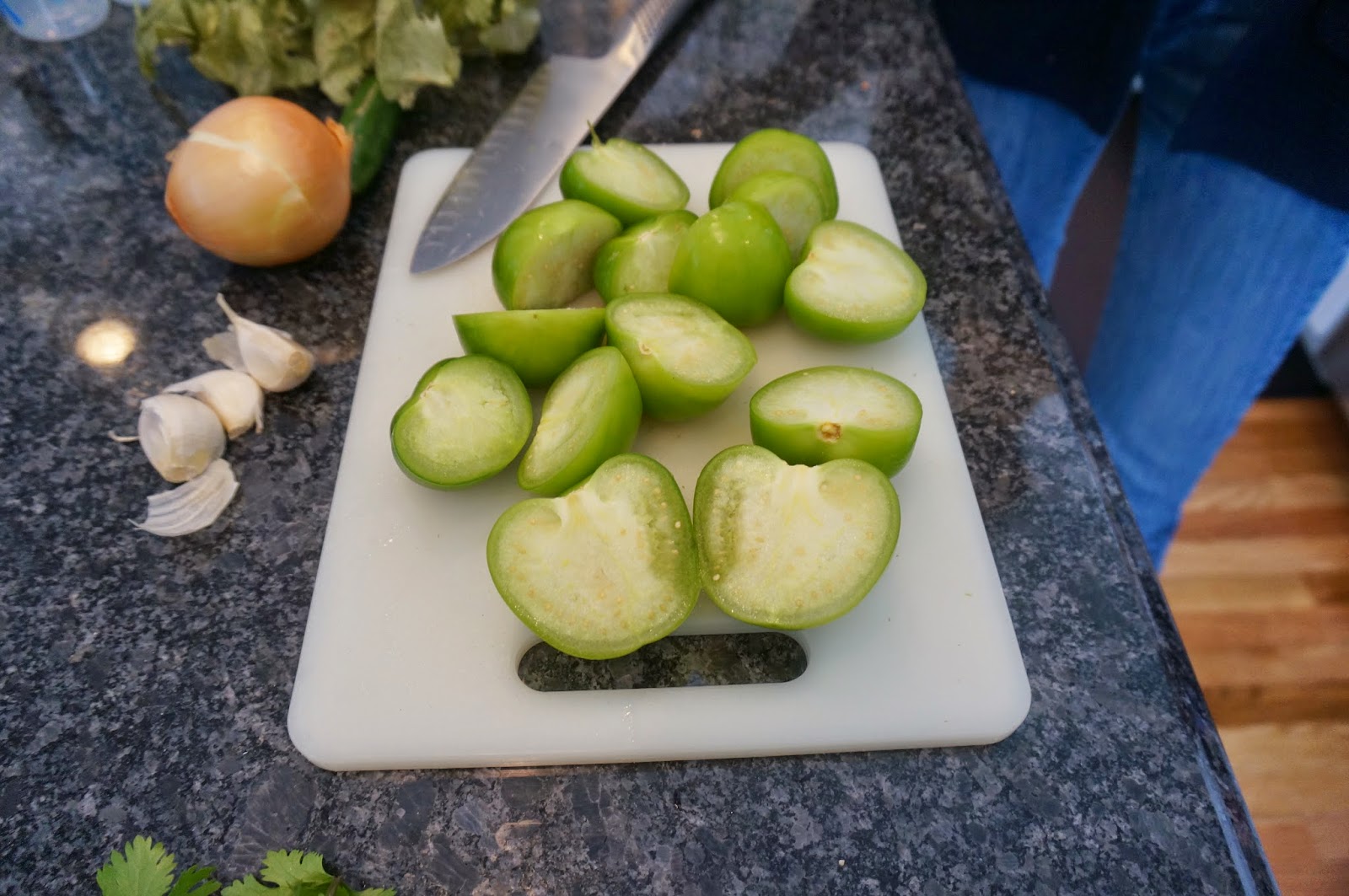 Cut a jalapeño in half. Remove the seeds. 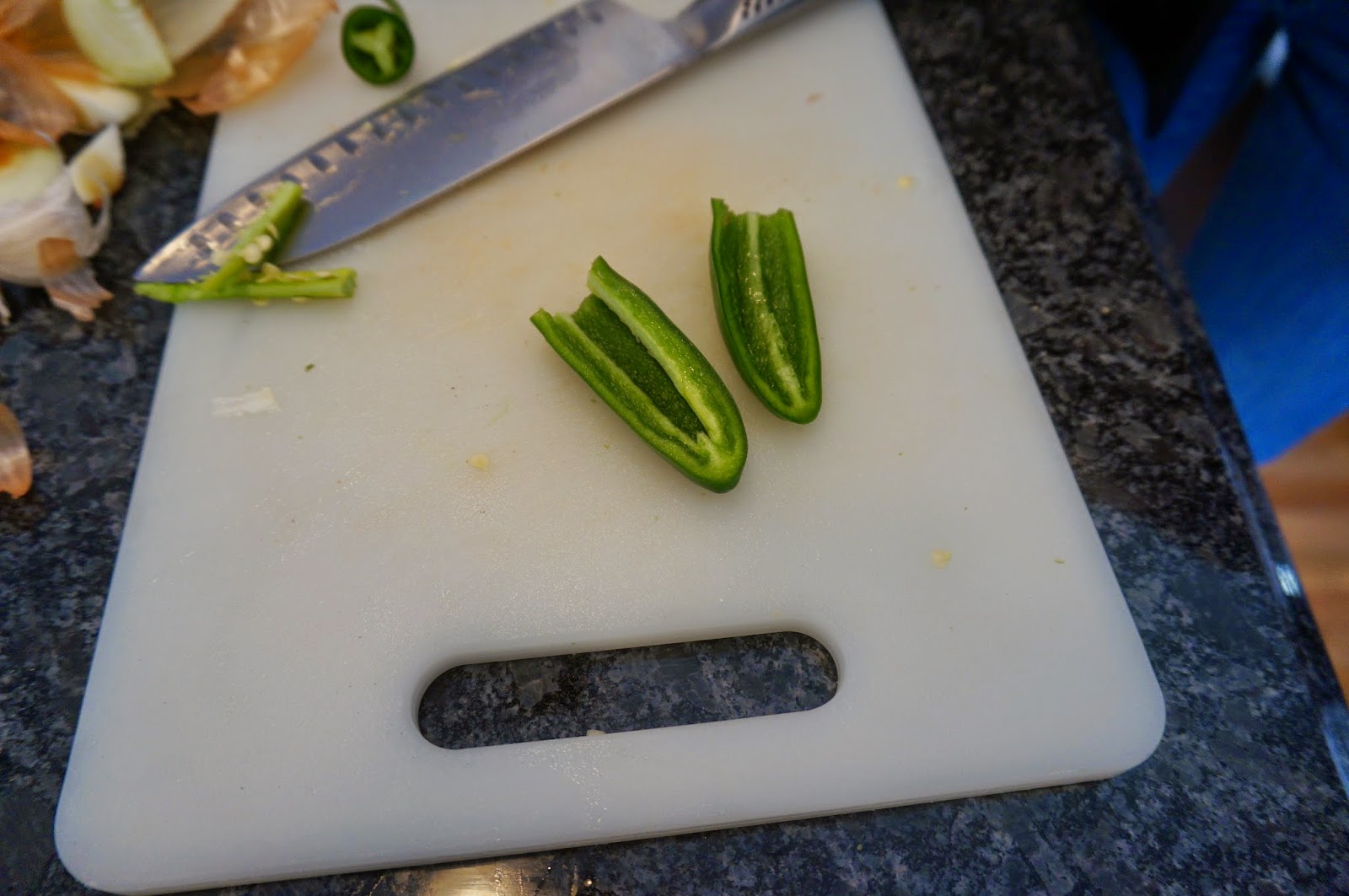 Grab a big bunch of cilantro. Mine was pretty sandy, so I had to clean it. 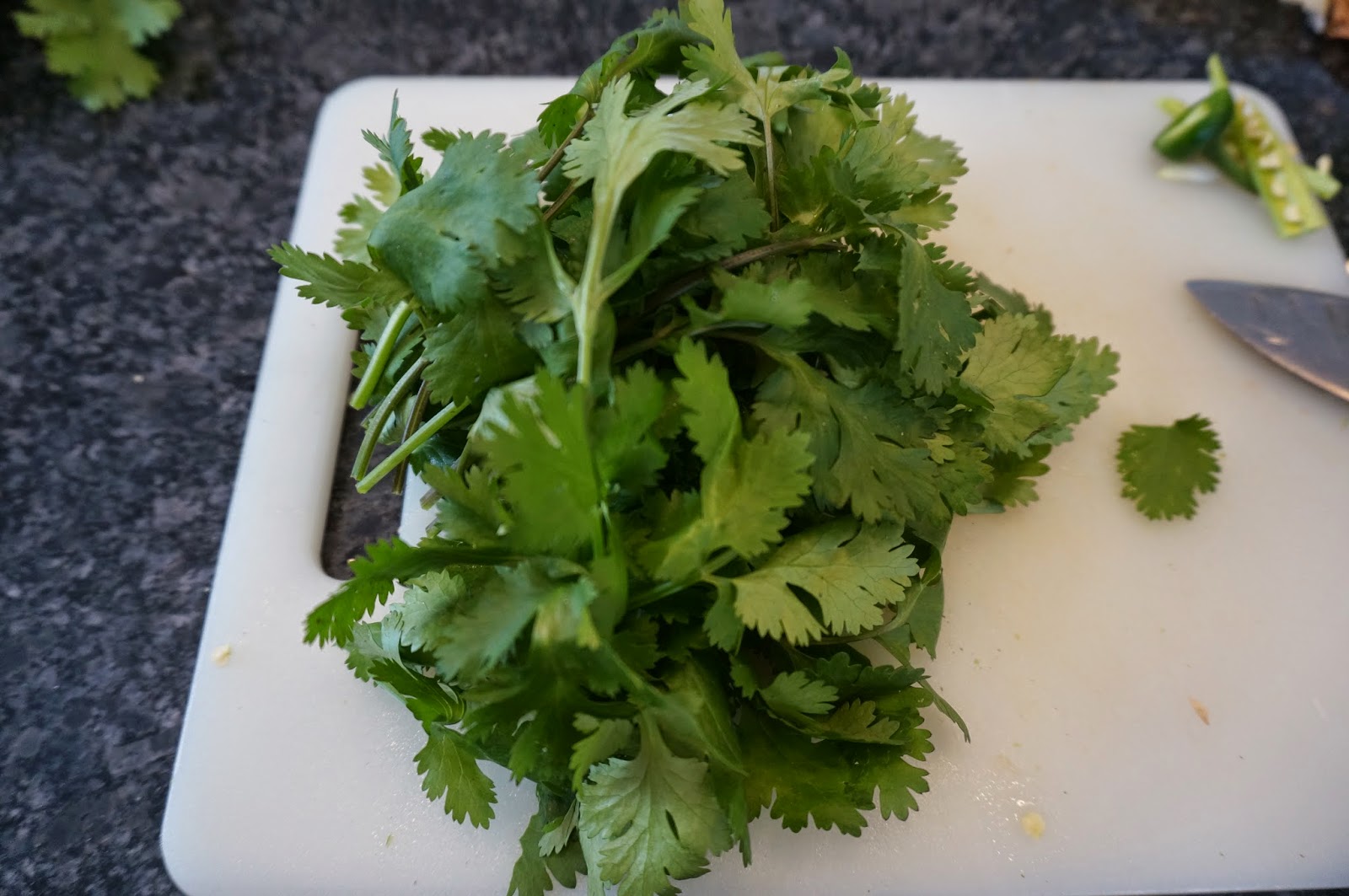 The best way to clean sandy, leafy greens, is to put them in a bowl of water and agitate them little bit. The sand will fall to the bottom of the bowl, and then you can just lift out the leaves. Boom. 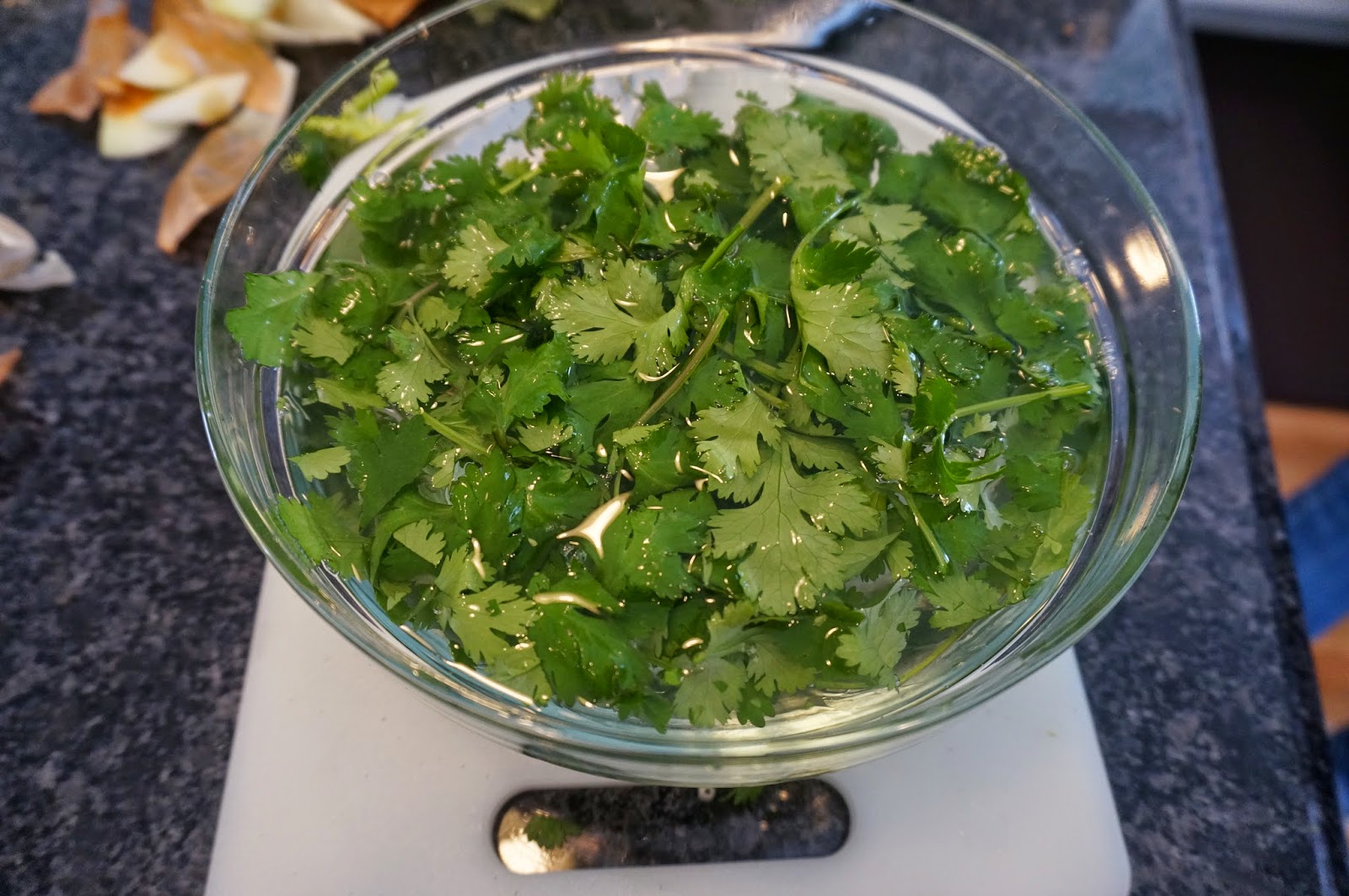 Throw all the ingredients, including the onion and garlic I didn’t show you (you’ve seen them before), into a pot. Add some water, and cook. Note that the prep time thus far has been about 5 minutes (my sister timed it, I’m not kidding). 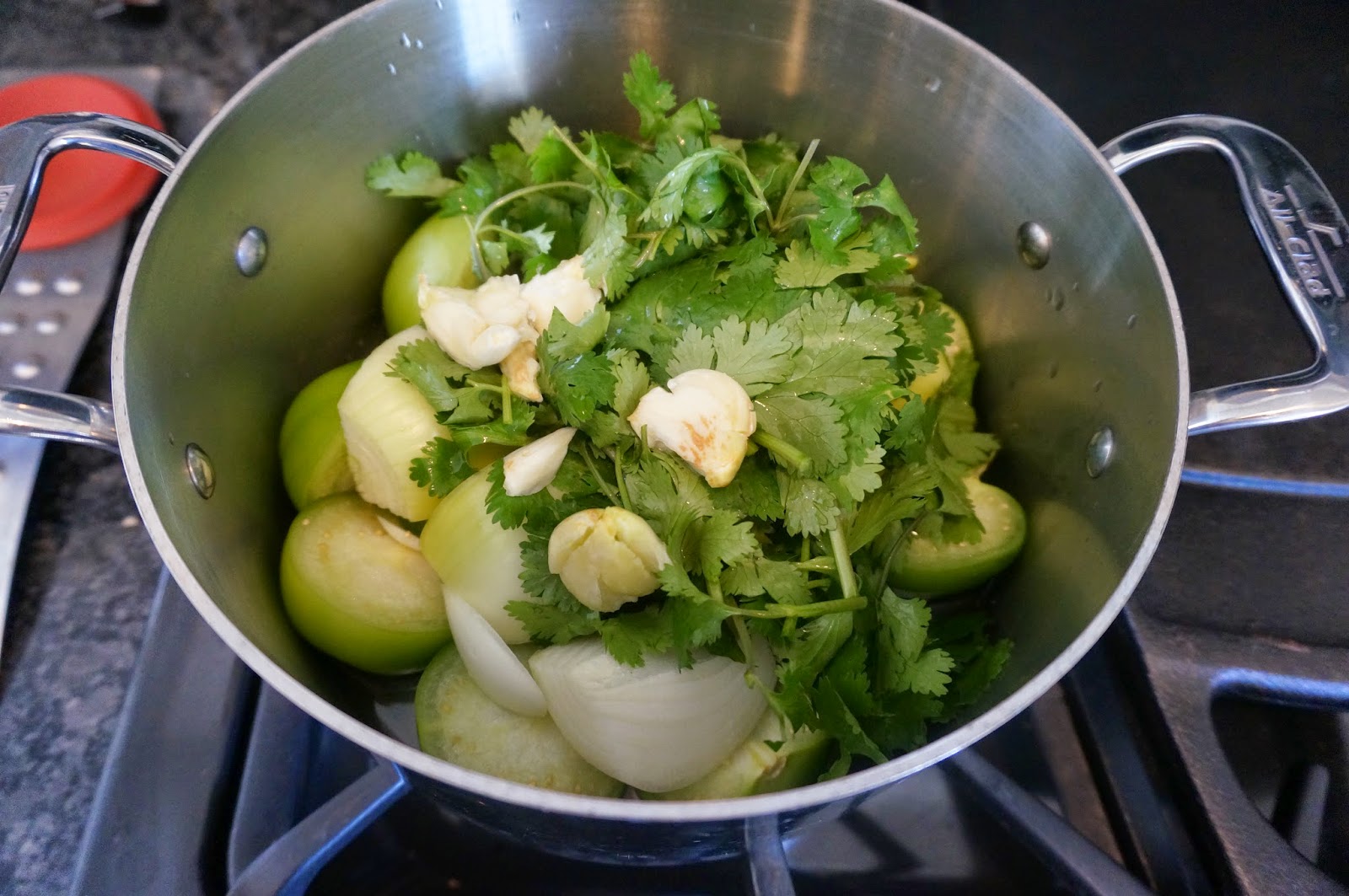 This is what the whole thing looks like after 15 minutes. 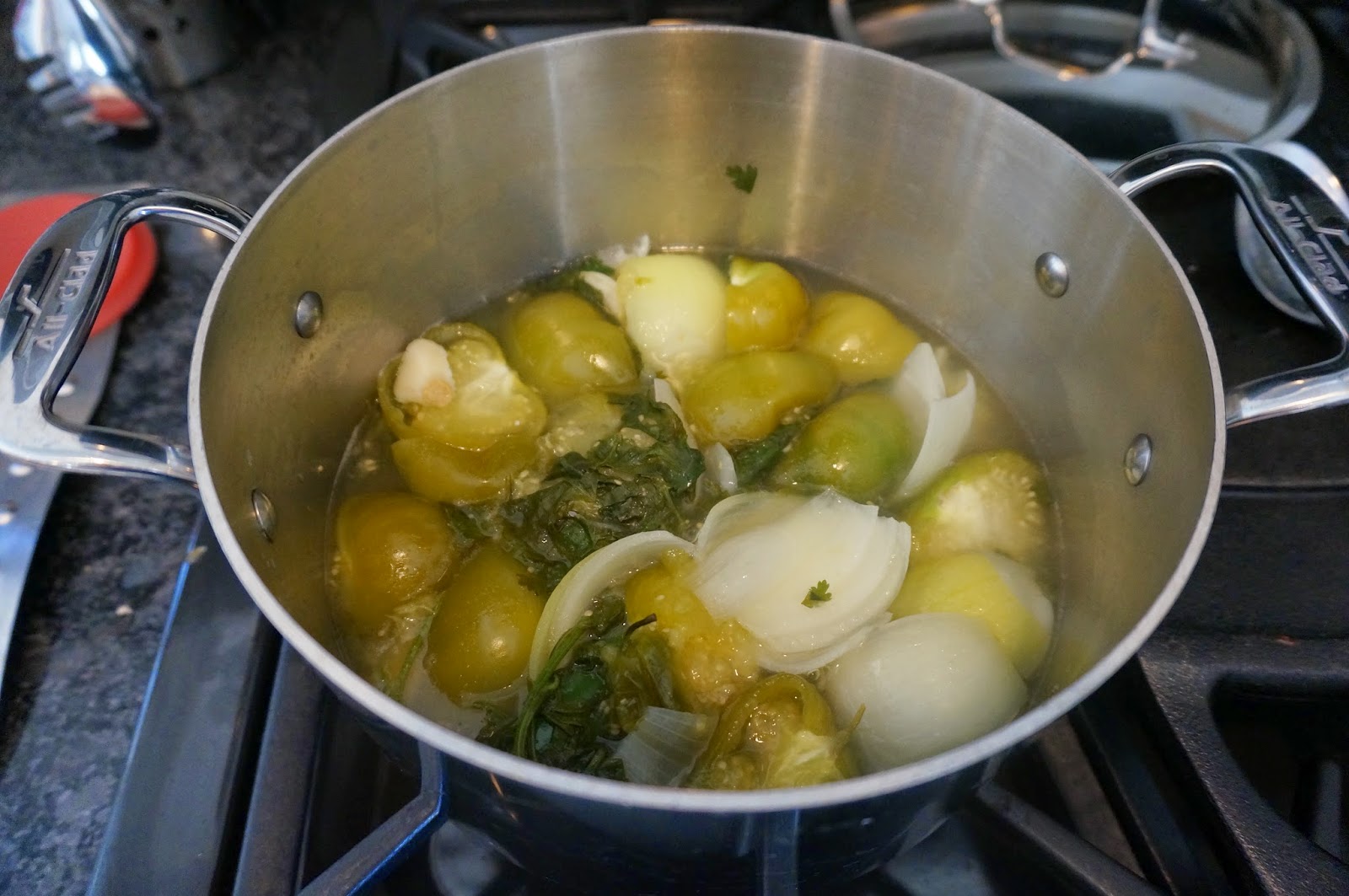 Put it all in a blender, puree leaving some texture, and return it to the pot. 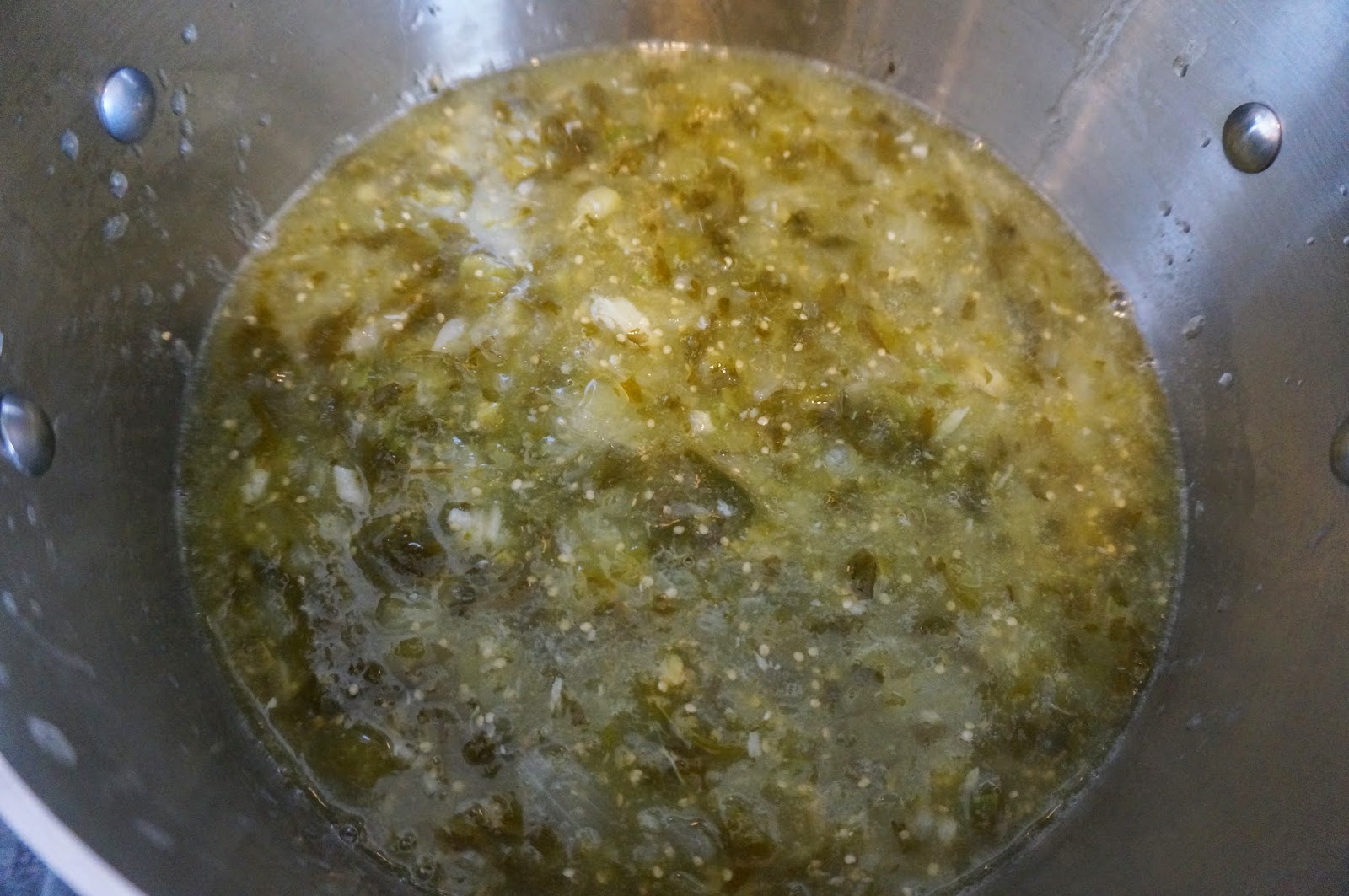 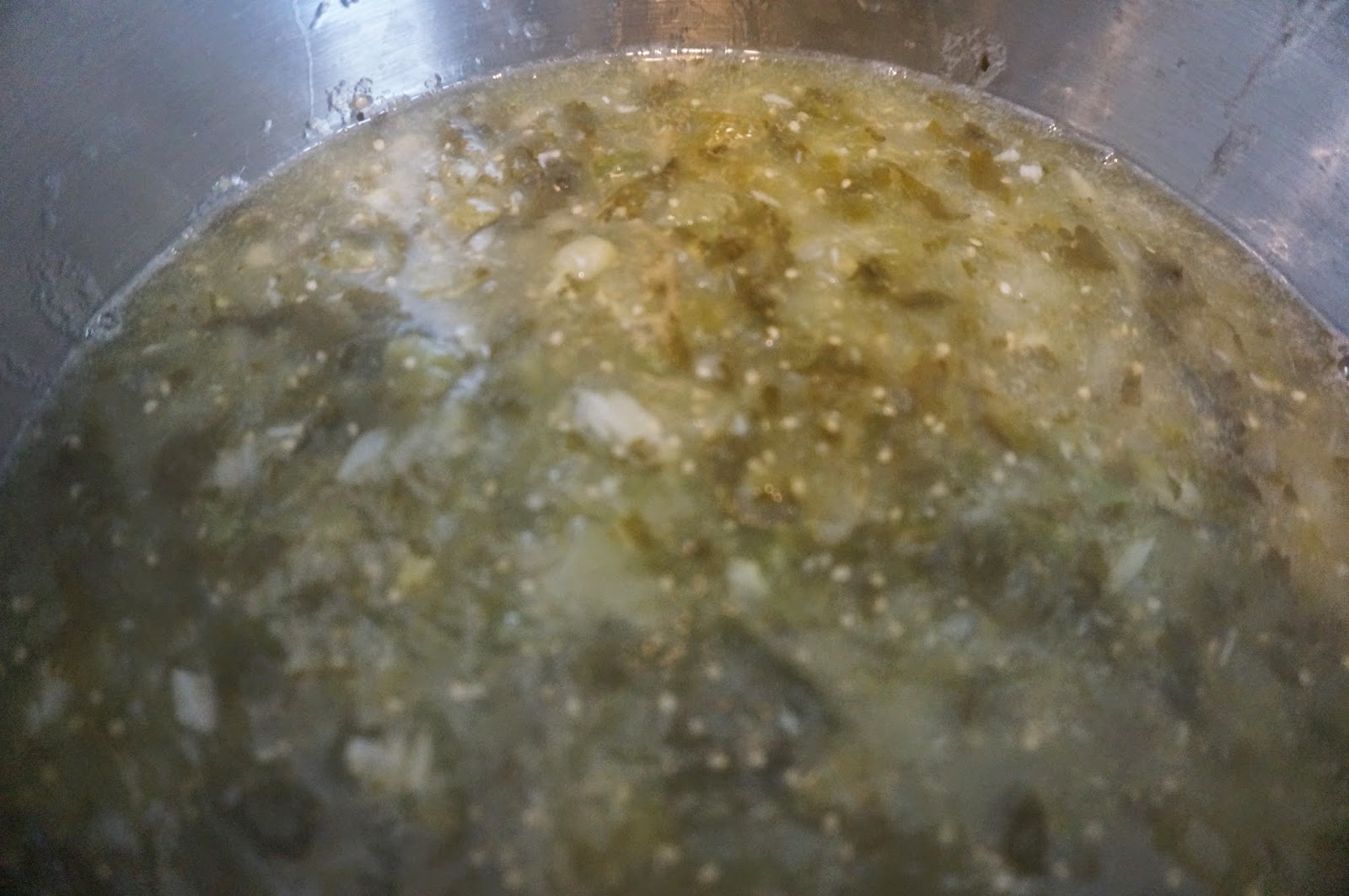 Add the chicken breasts to the pot, bring it back up to a simmer, and let it cook. 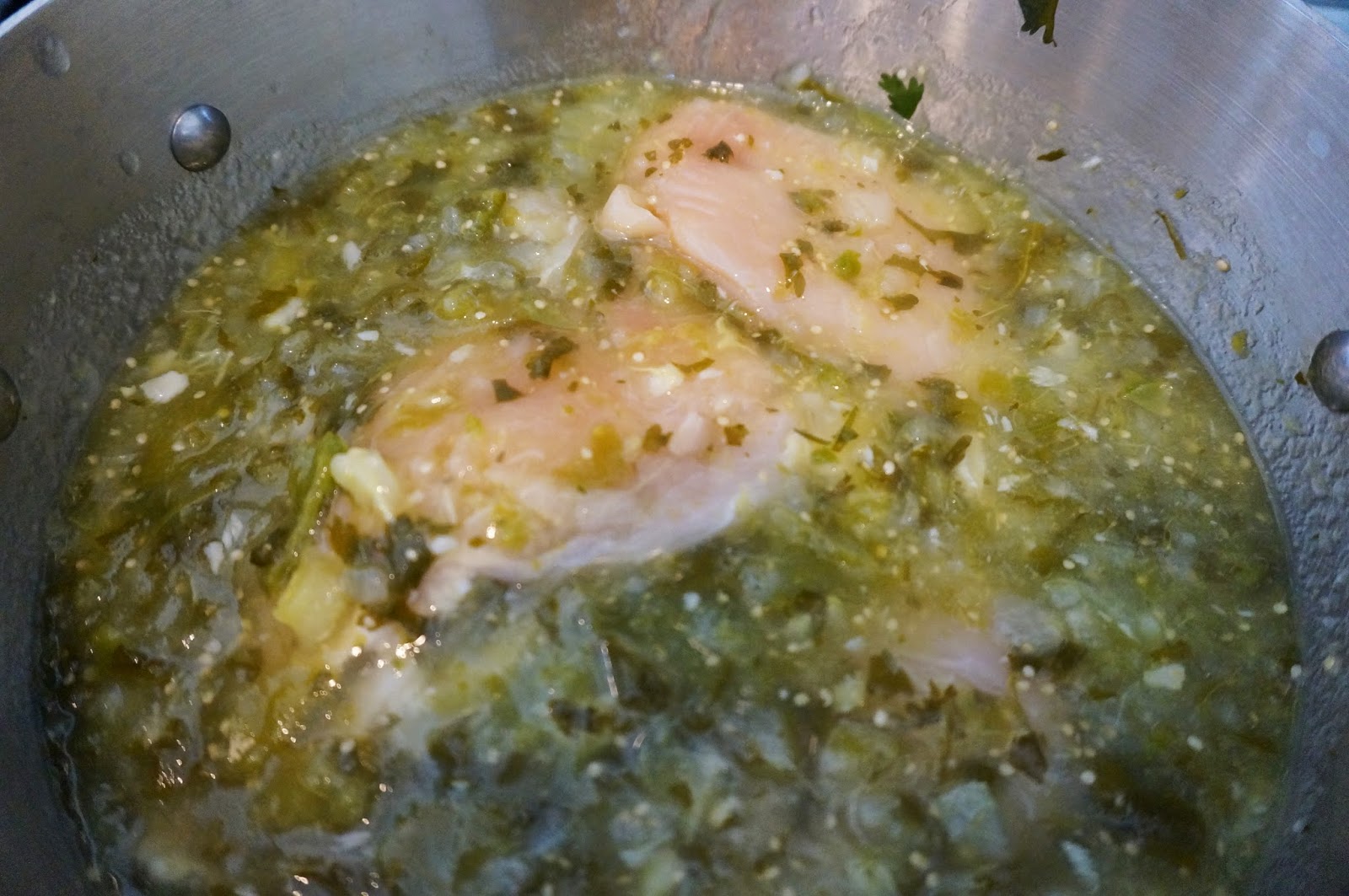 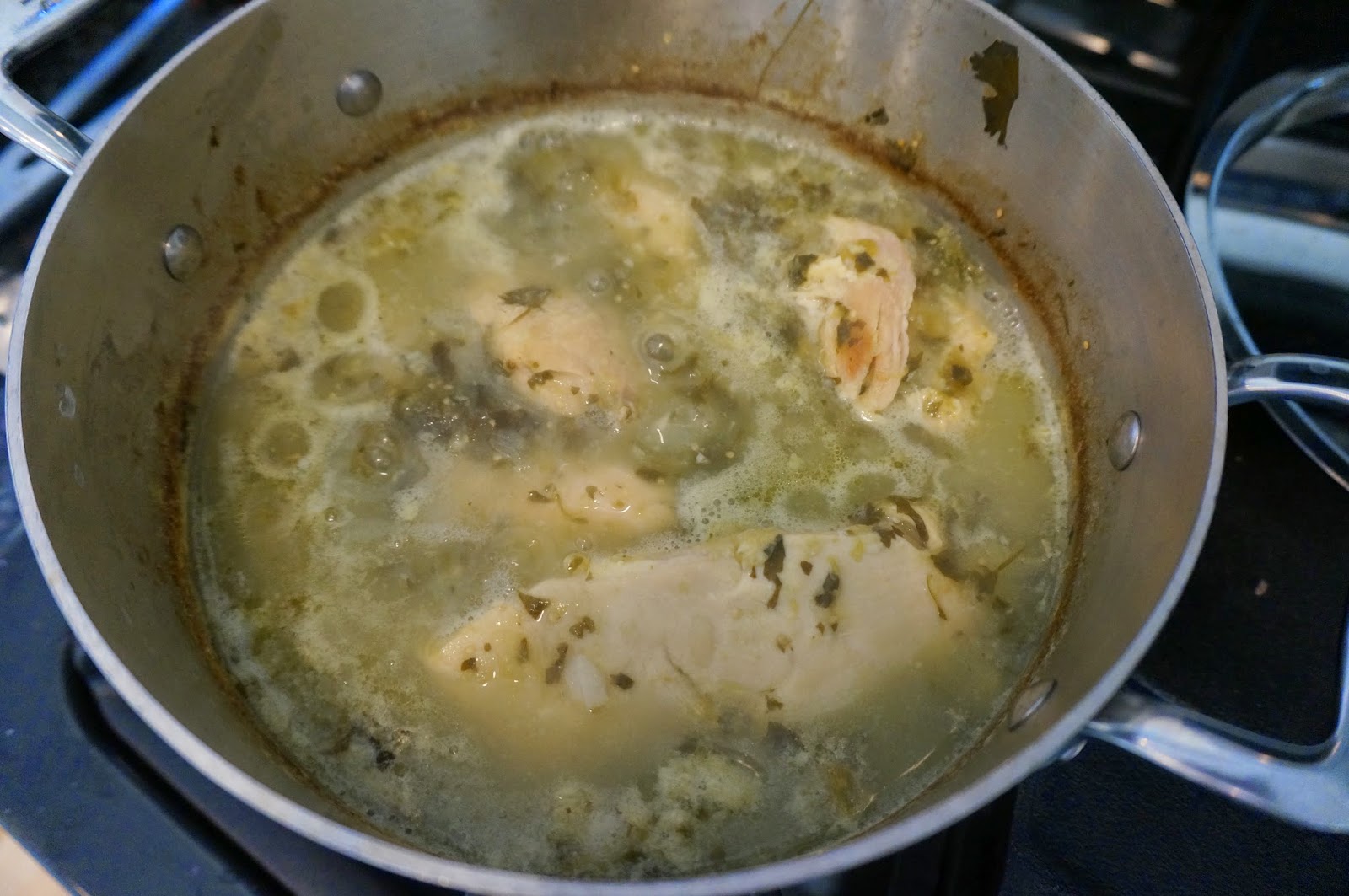 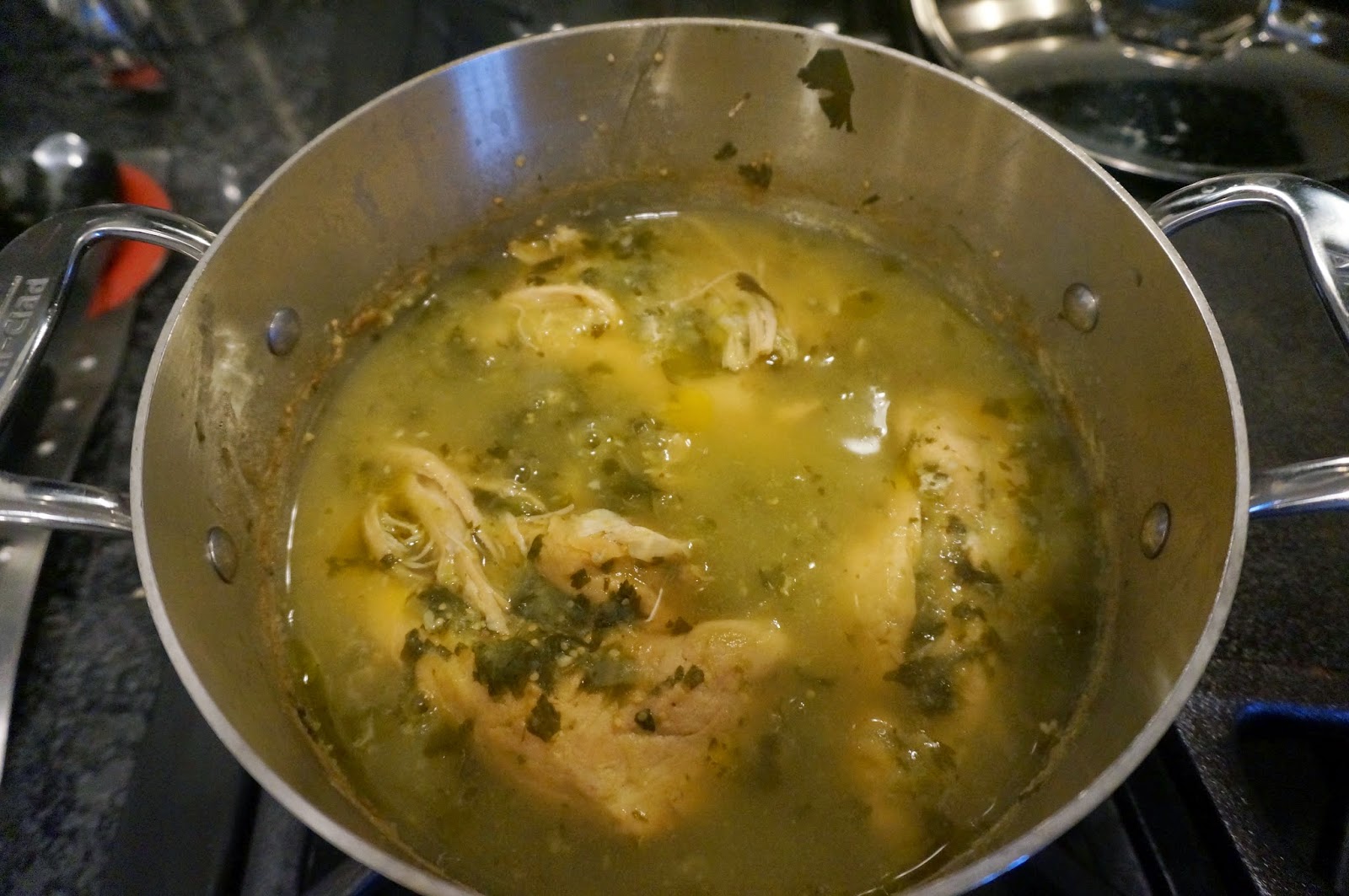 After hours, the chicken will easily fall apart. You should be able to shred it with one fork. 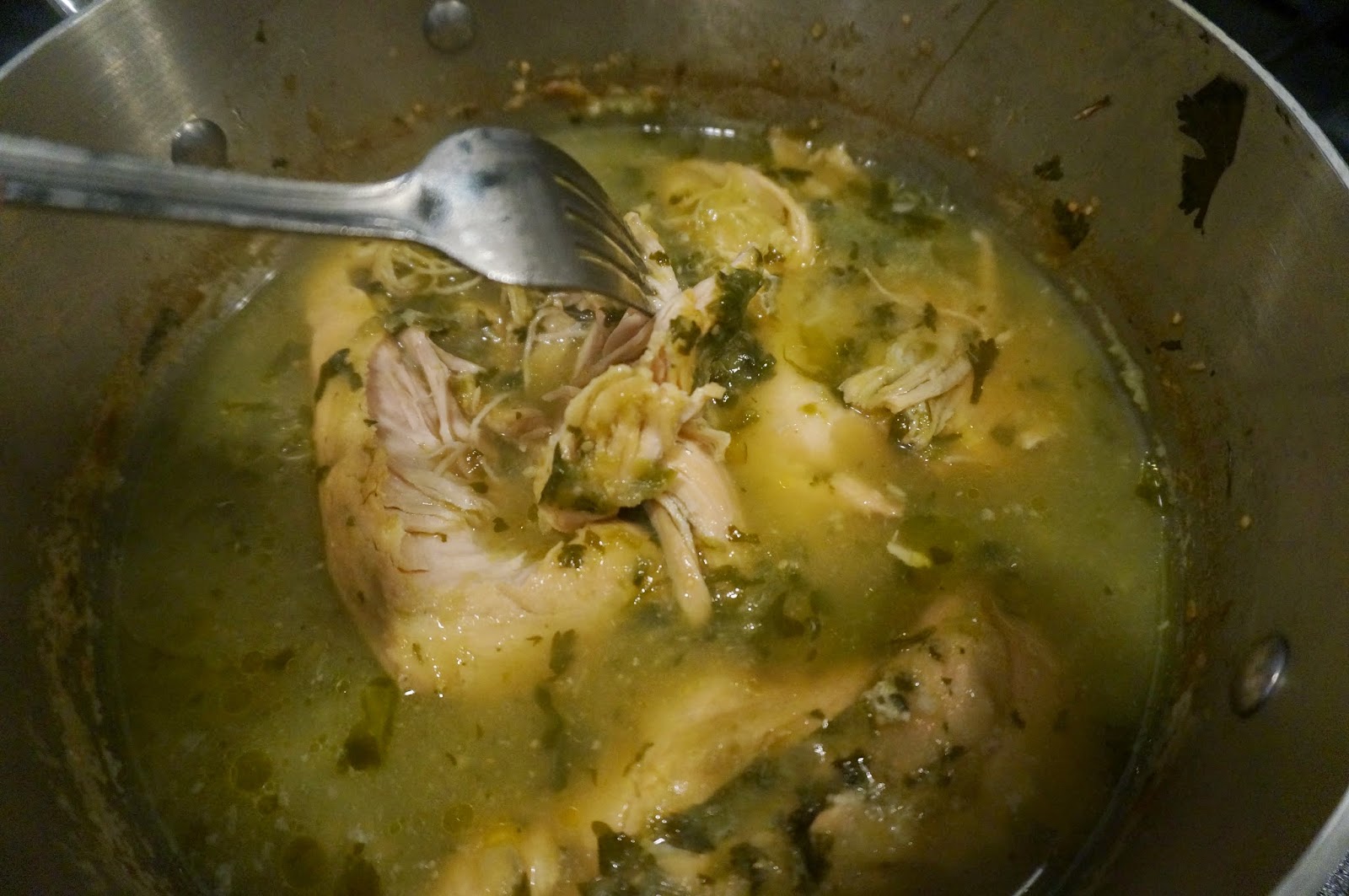 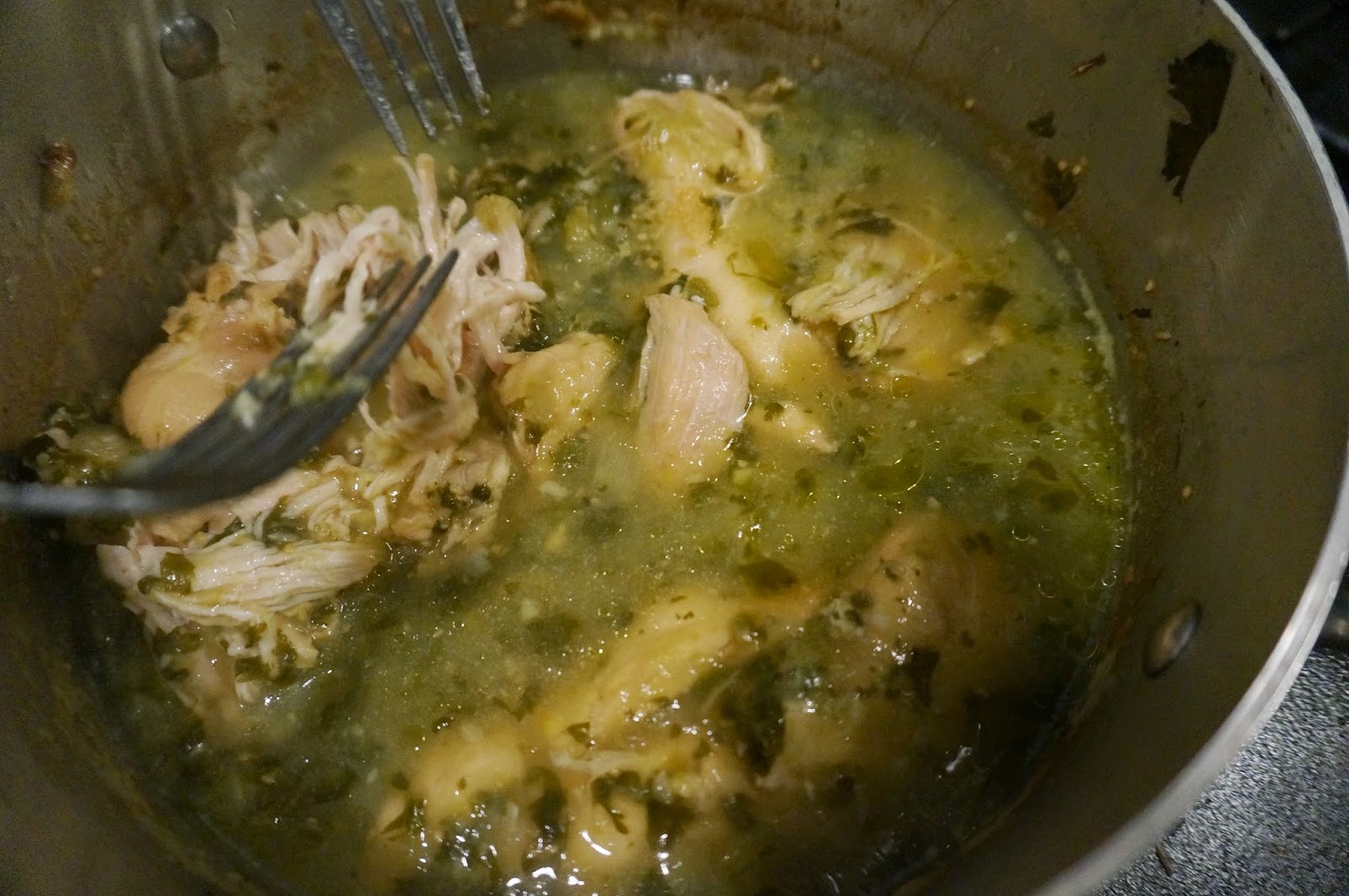 Shred it all up. 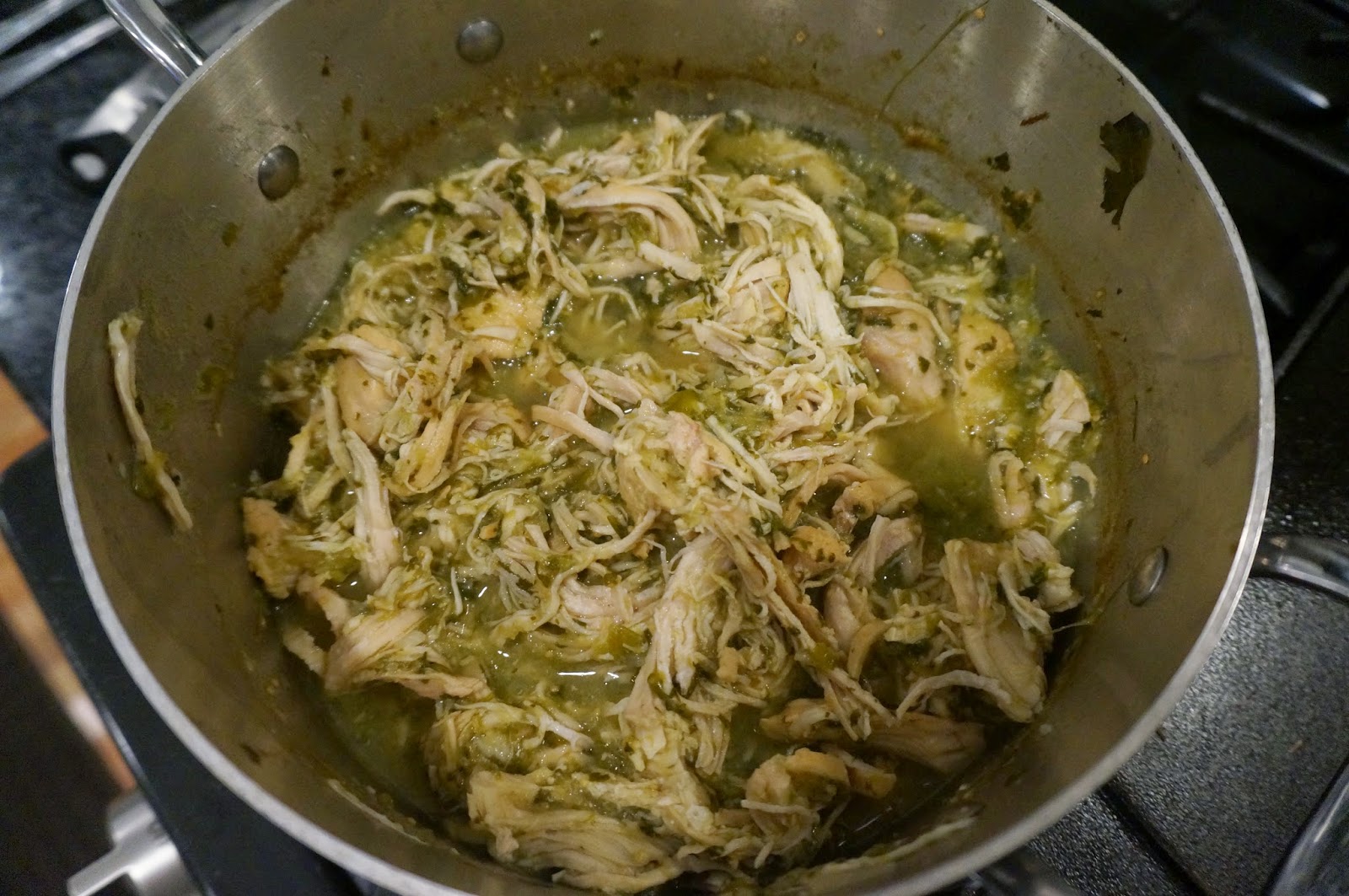 One serving option is to make tacos. We spread some guacamole on a tortilla, and topped with the chicken and sauce. Mmm. 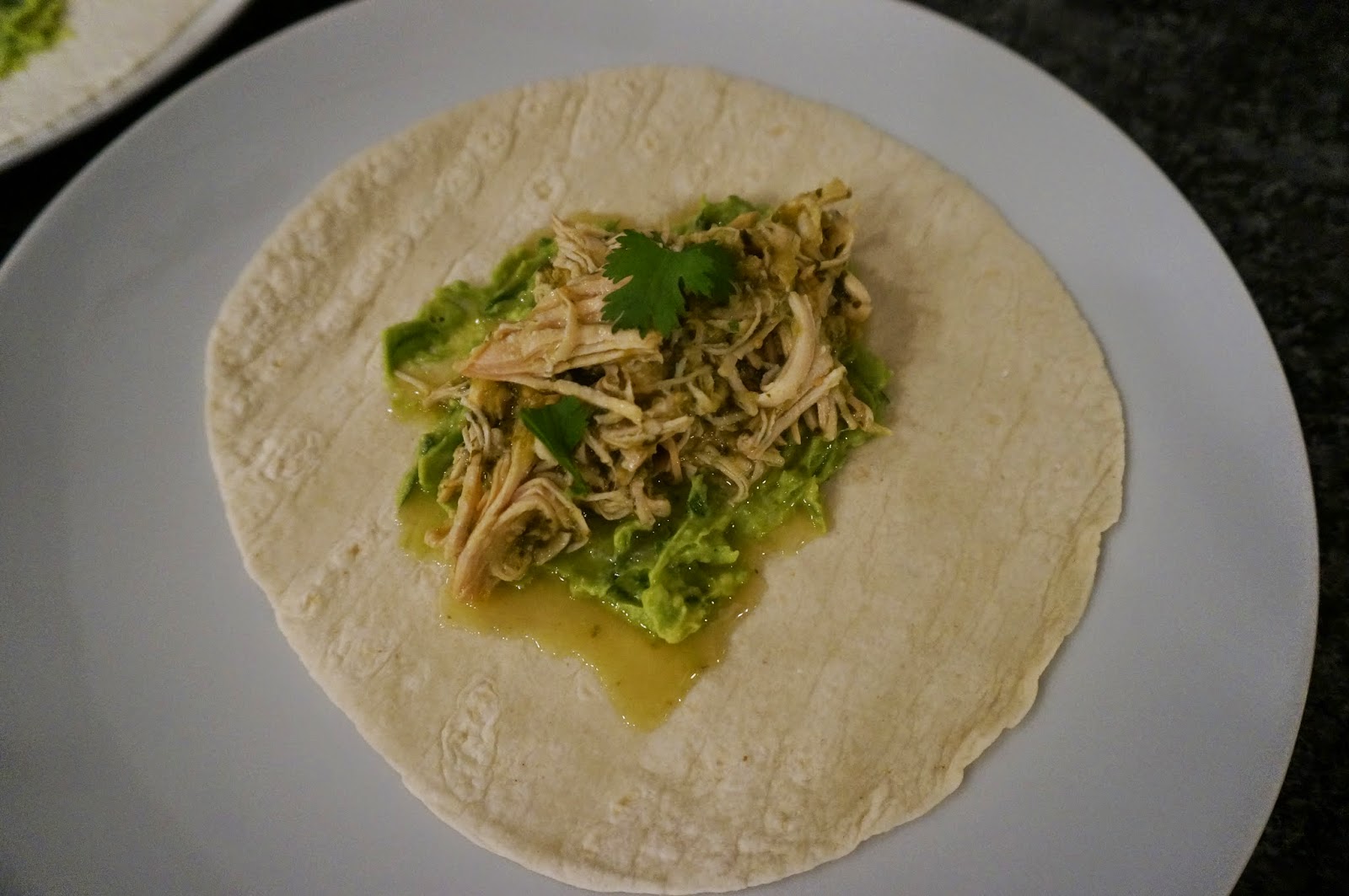 Place the tomatillos, onion, garlic, cilantro, jalapeño, and water in a large saucepan. Cover, bring to a boil, reduce to a simmer. Cook until the tomatillos are tender, about 15 minutes. Allow to cool slightly.

When the tomatillo sauce has cooled slightly, pour it into a blender. Pulse until it is smoother, but still has some texture (see pictures above). Note: Be sure that the sauce isn’t hot, or else it will explode from the blender and burn you! If you are unsure whether it is cool enough, err on the side of caution! Also, hold a towel on the blender cover just in case. Season the sauce with salt to taste.

Tacos: Anything goes! Get soft or hard shells, guacamole, sour cream, tomatoes, etc. Everyone can build their own (kids love taco bars!).

Enchiladas: Before making these, set aside about a cup of sauce to pour on top. Put a few spoonfuls of chicken and a little jack cheese in a flour tortilla, roll it up, and put it in a baking dish. Do this with the remainder of the chicken/tortillas, until you run out of room in the baking dish. Pour some of the reserved sauce on top, add some more cheese, and bake in the oven until the cheese is melted.

Chili: Add some white beans to the chicken and sauce, cook for 10 minutes or so, and serve.

On its own: Serve the chicken and sauce on top of some rice, maybe with a side of black beans.