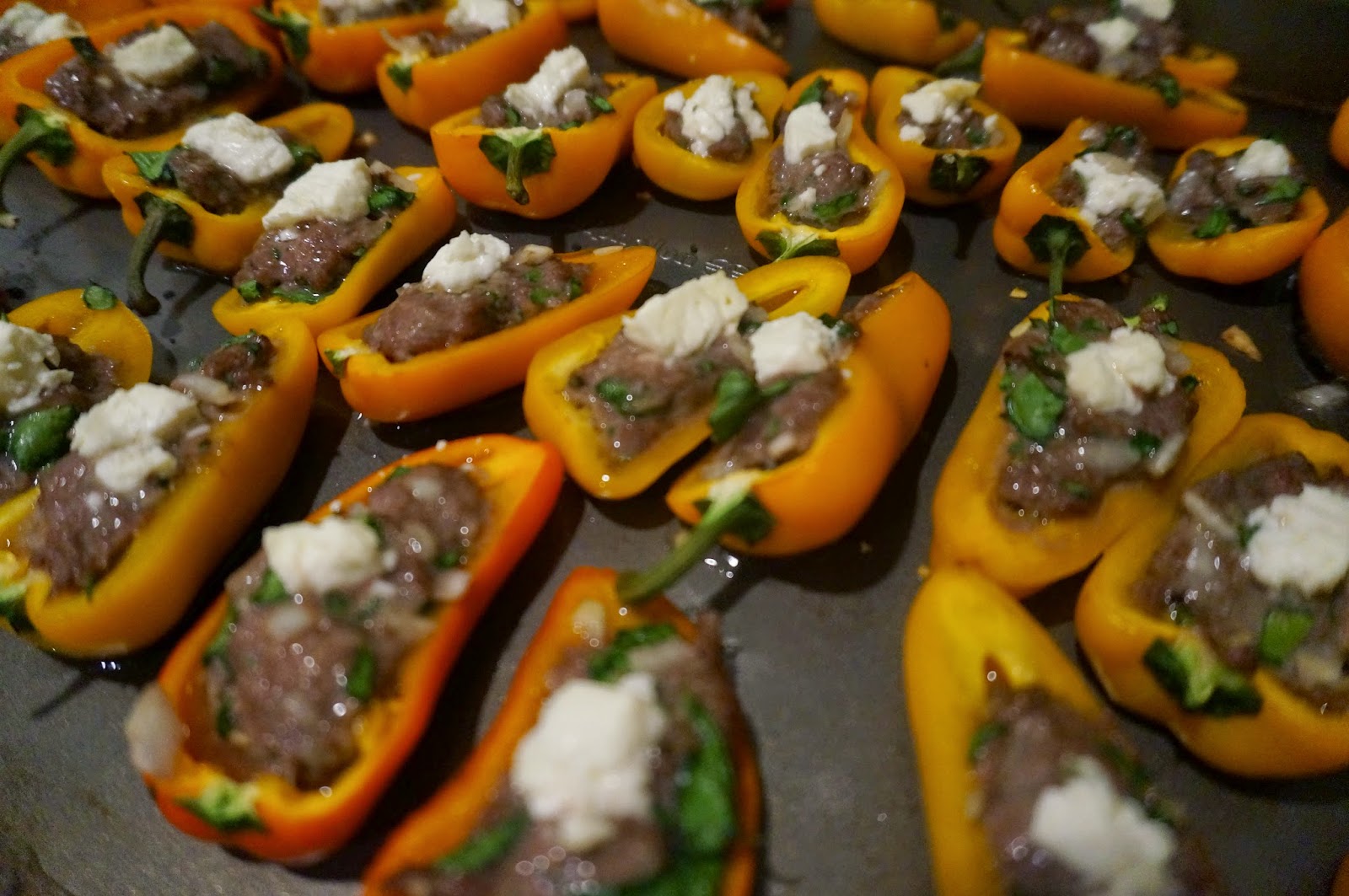 What a day! In case you live under a rock, today was Snowmaggedon in Boston, and we got pummeled with more than two feet of snow. In fact, even the outpatient clinics at my hospital were closed, a rare occurrence around here. Thankfully (and I hope I don’t jinx it), we still have power, and thus I still have my sanity. Phew.

In response to some gentle nagging/harassment from my very dear friend, Lisa (aka Hombre), I decided to cook actual dinner tonight and then post it. I had to think pretty hard about what to make, since we’re a little overdue for a trip to the grocery store. Maybe I should clarify: I expected our power to go out, so we stocked up on tuna, Doritos, Cheez Its, and whiskey–the essentials, really. I did not stock up on anything necessary to make a real meal. #Sadface. I had some ground beef in the freezer, though, and that is usually the start of something delicious.
Last weekend, while braving the crowds at Costco, I bought a bag of mini sweet peppers. Why, you ask? Honestly, I don’t know. This is literally the second time I have ever bought them, and they seemed like a more manageable quantity than the other things there (a crate of oranges? Ten pounds of onions?), so I just grabbed them. Then, it dawned on me: I will stuff the peppers. Hooray! After about 20 minutes of contemplating what I wanted to put in the stuffing, I went with Greek-ish flavors and got down to business.
So, this is not exactly a quick prep kind of dinner. It’s snowing, and I had a little bit of time, so I made it anyway. The prep is easy, but it’s a little time consuming. I suggest making these on a weekend, or breaking the prep up into steps if you want to make them on a weeknight. For example, you could mix the stuffing together the day before, and cut the peppers up the day before, then just stuff the peppers right before cooking them. Not too bad. Plus, the flavors will have time to marinate into the beef, and I bet it would taste even better.
After I made these, I realized that they would be an excellent party appetizer. They’re only two bites, but pretty filling and tasty. The peppers still maintain their shape, so they’re easy to pick up and eat. In fact, I think I will make them for my next party! For tonight, they made an excellent dinner for me and my husband.
I apologize that I don’t know exactly how much ground beef I used. I bought a big package of it, and portioned it out before freezing. I am guessing that this was just around 1 lb, maybe less. You might need to adjust the seasoning if you use more or less beef.
Mince garlic and onions (I’ll spare you the pictures), and chop up spinach. 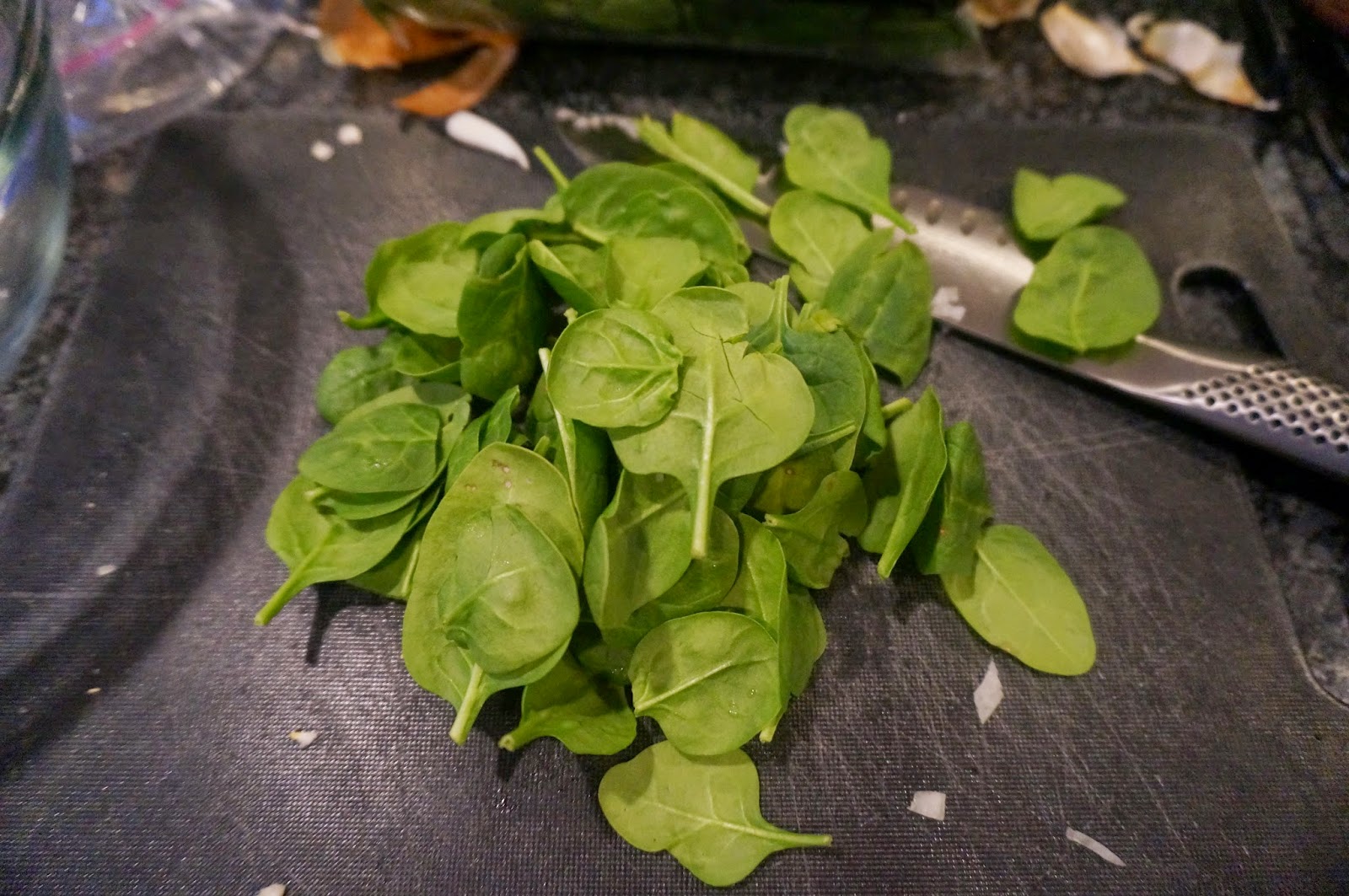 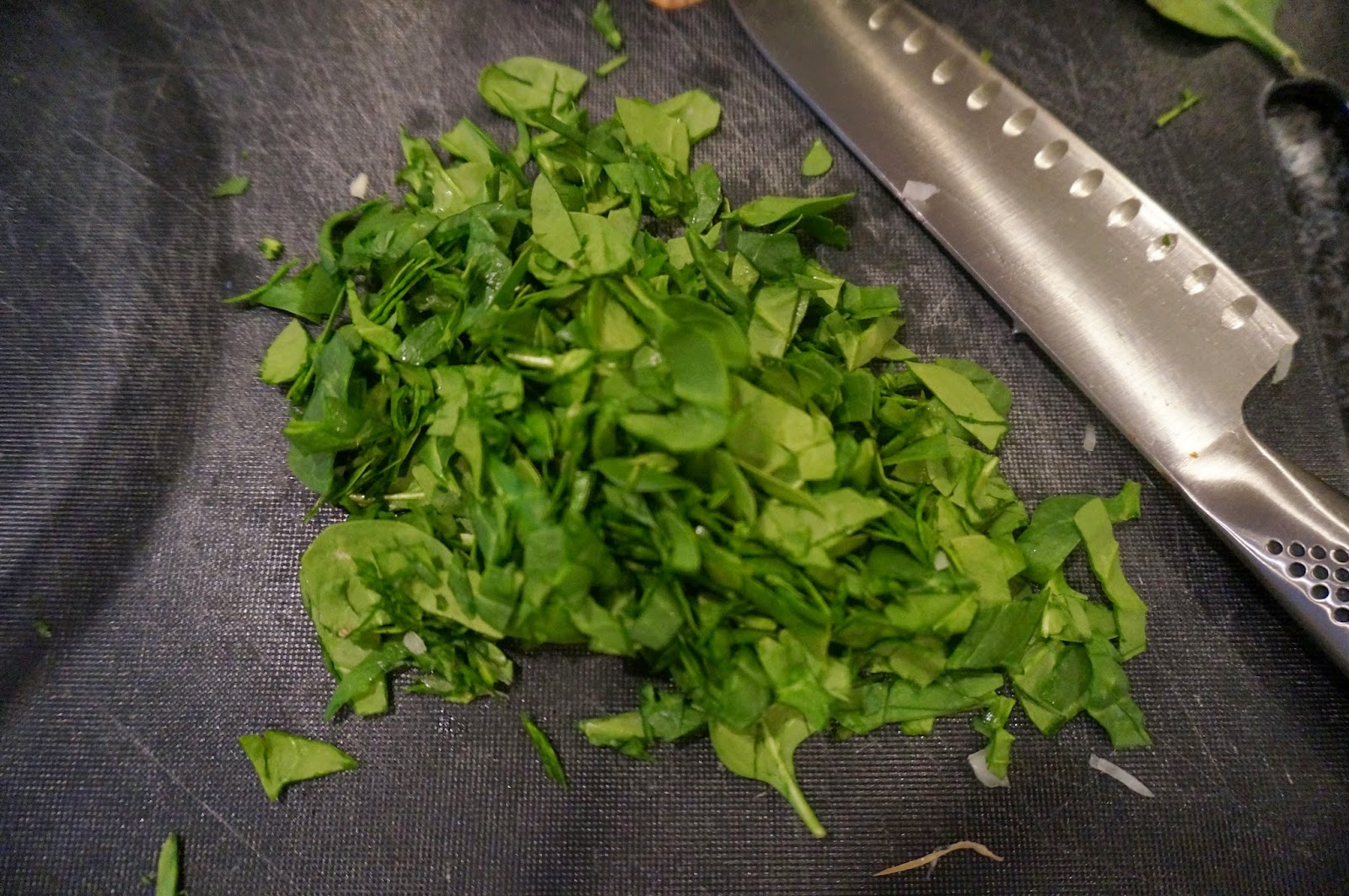 Add it all to a bowl. 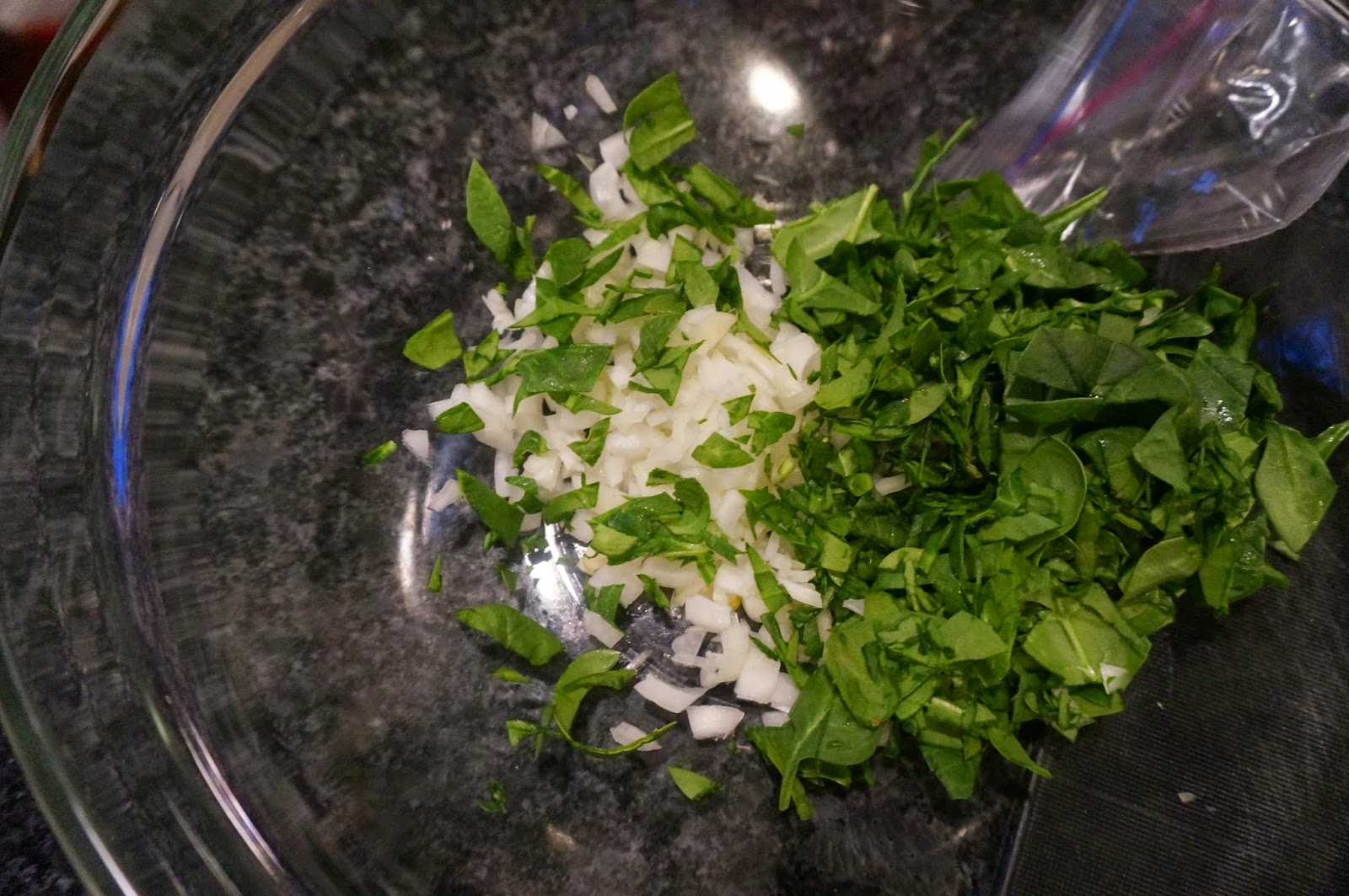 Add the spices and ground beef to the bowl. 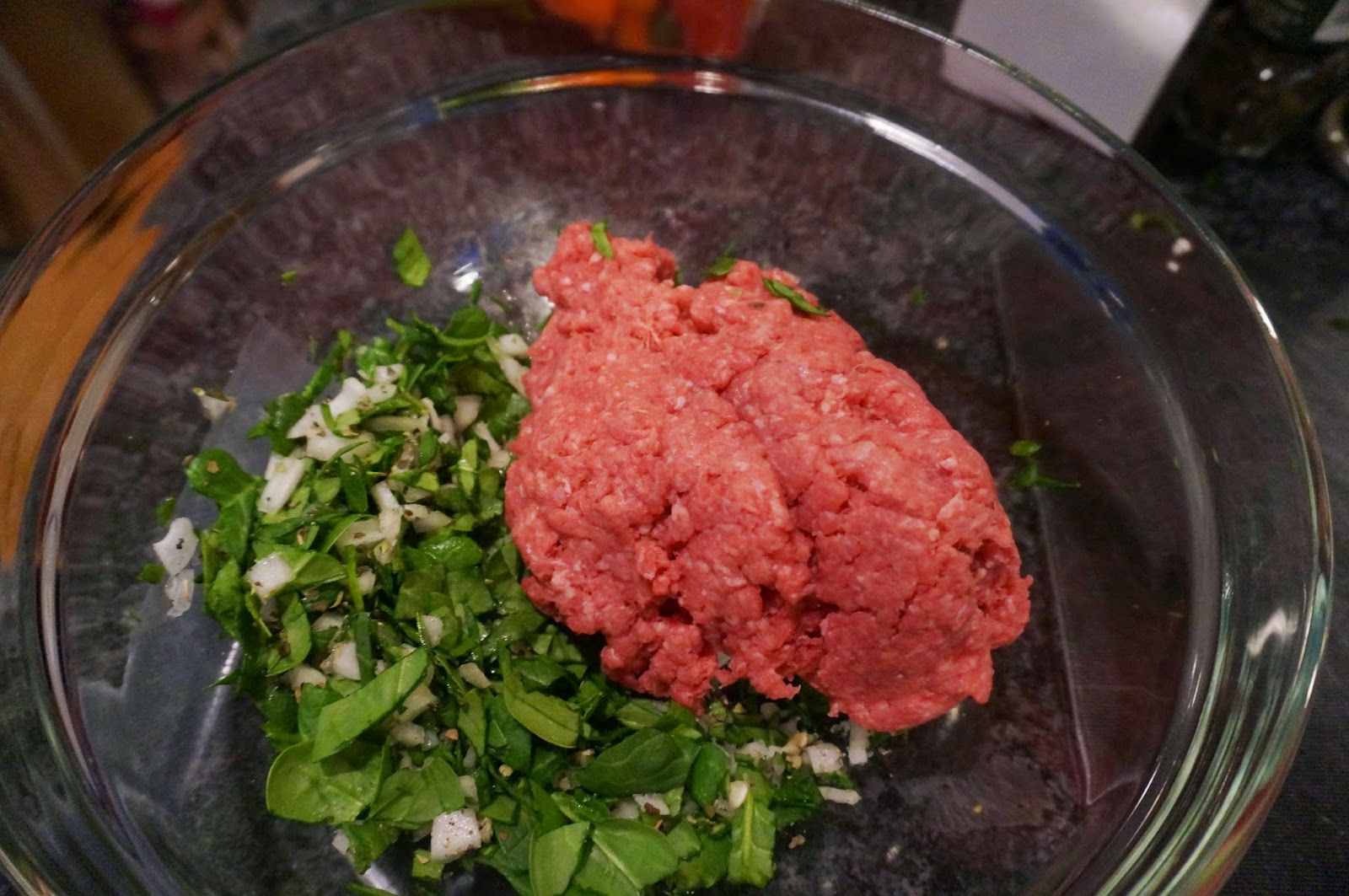 Mix everything together. Set aside.

Here are some mini peppers. Cut them in half lengthwise, and discard the seeds. 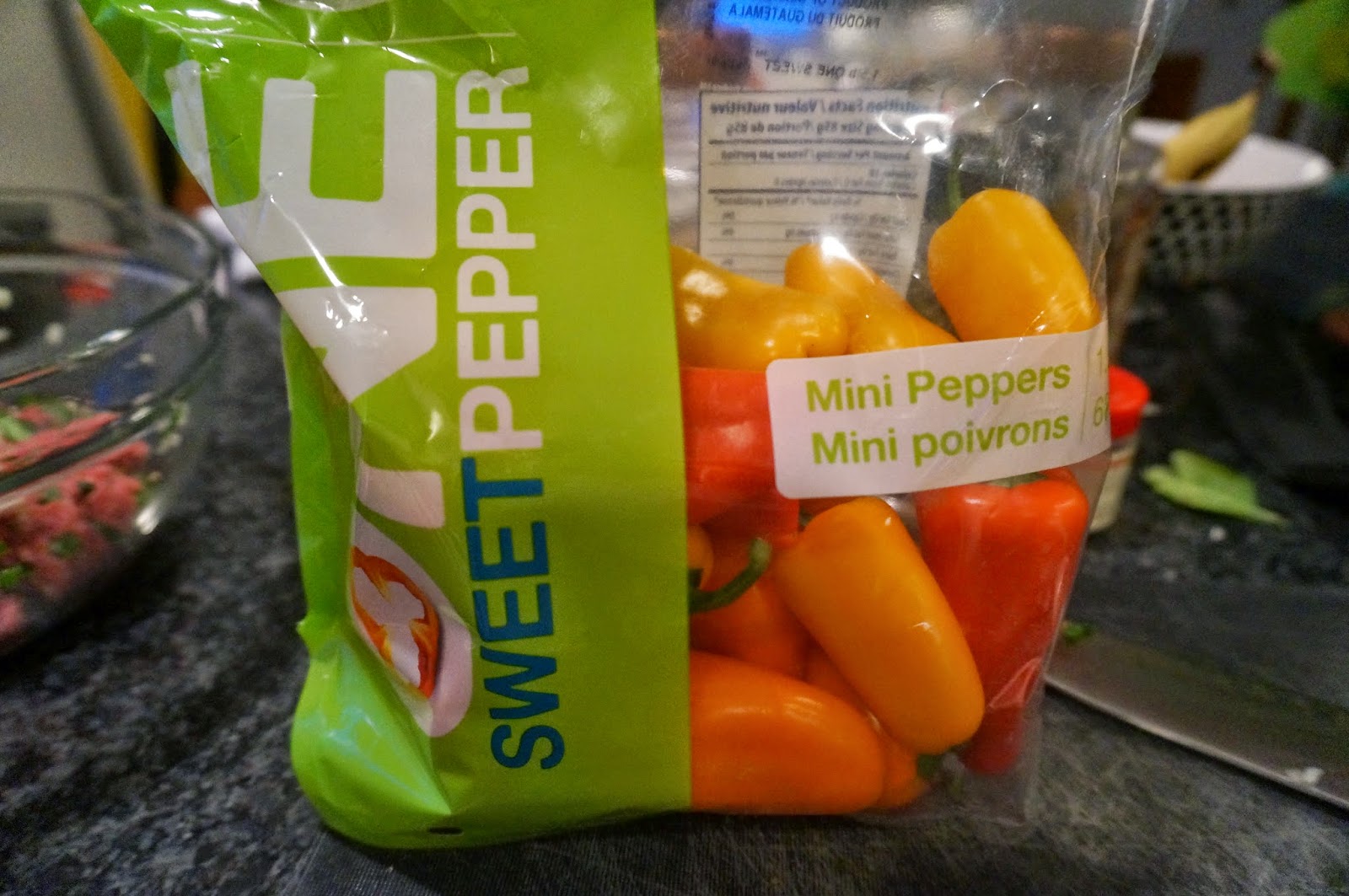 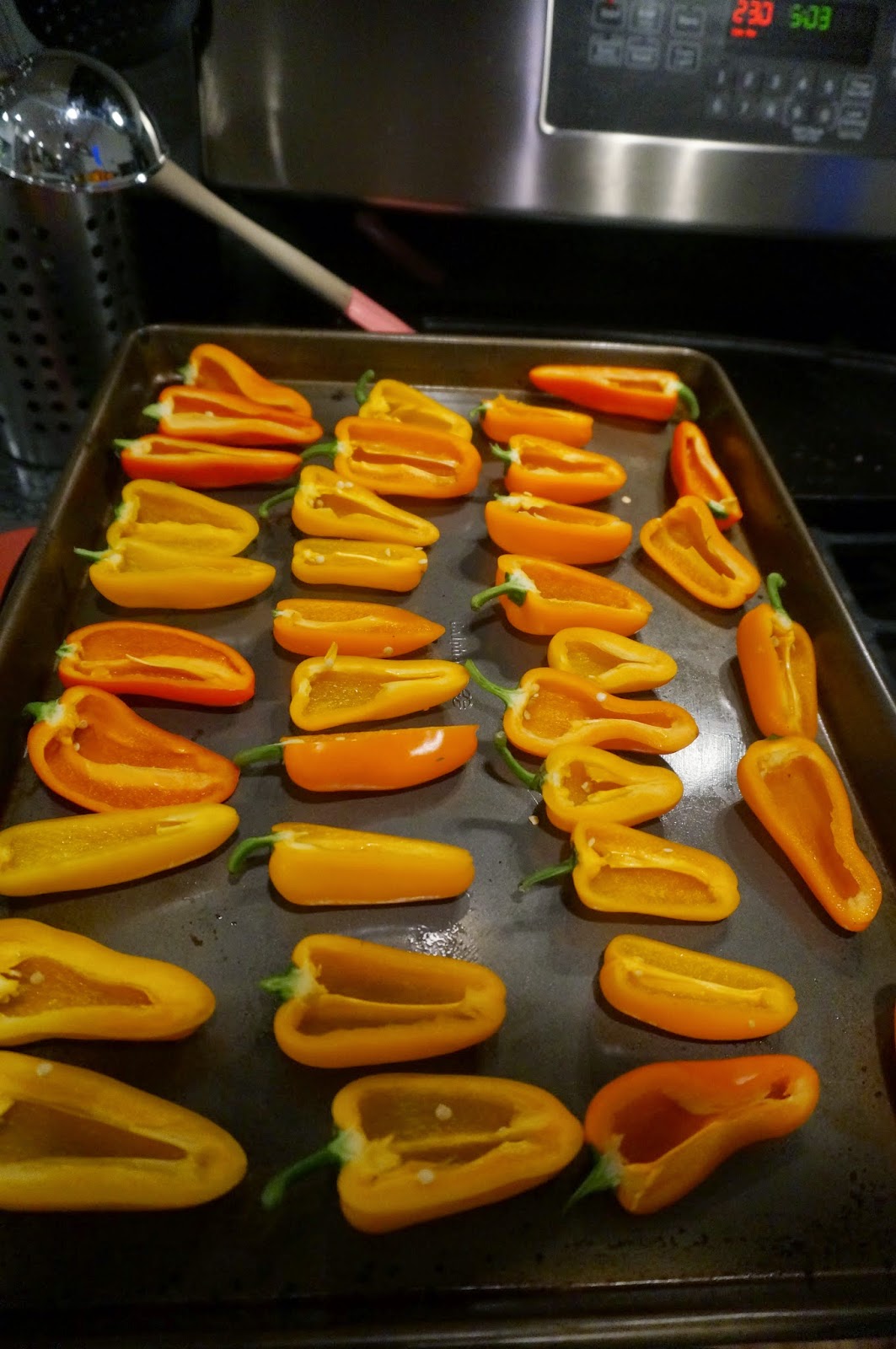 Stuff the peppers with the beef filling. 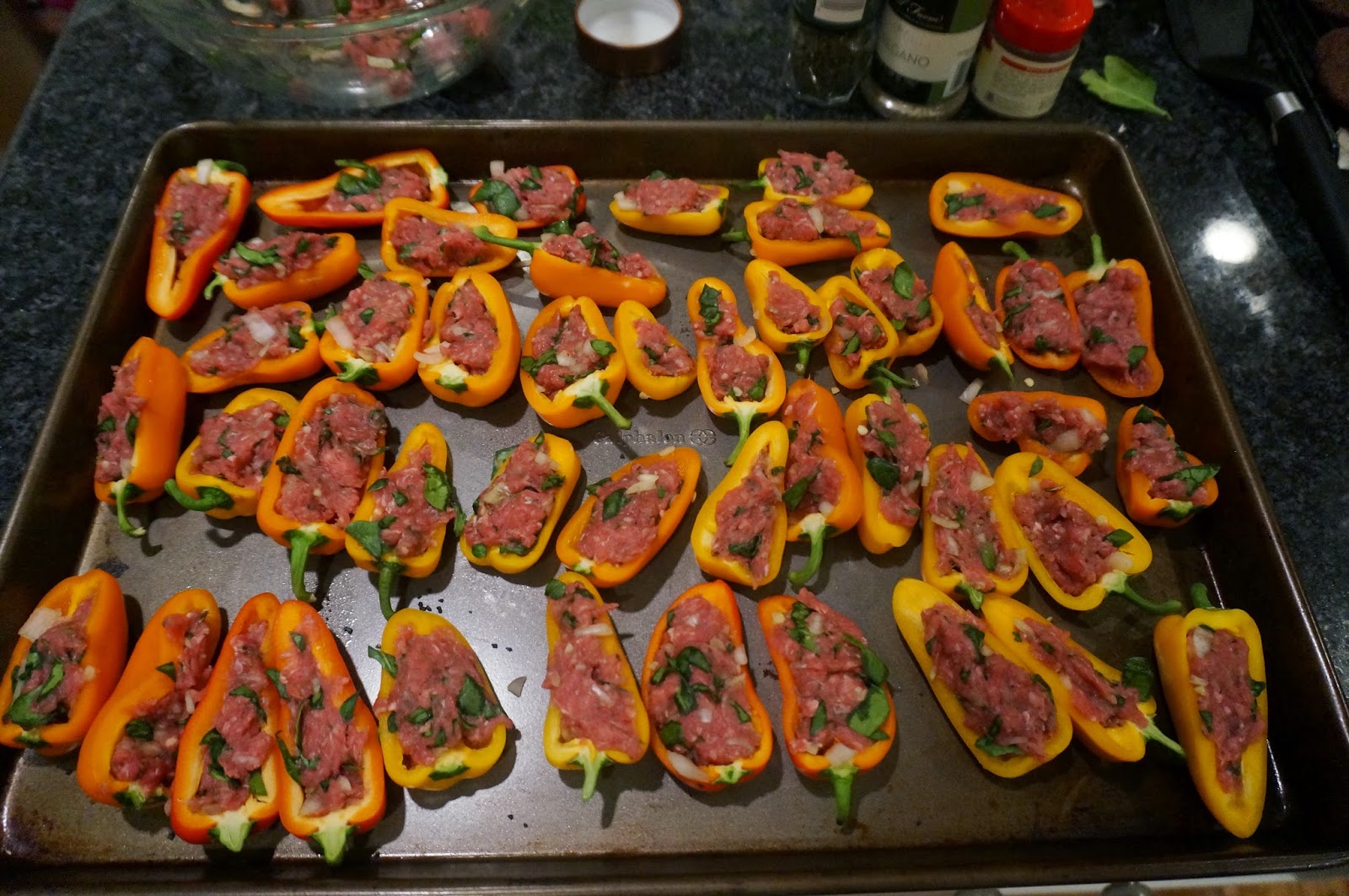 Take a small piece of feta cheese, and place it on each pepper. Really nestle it in there! 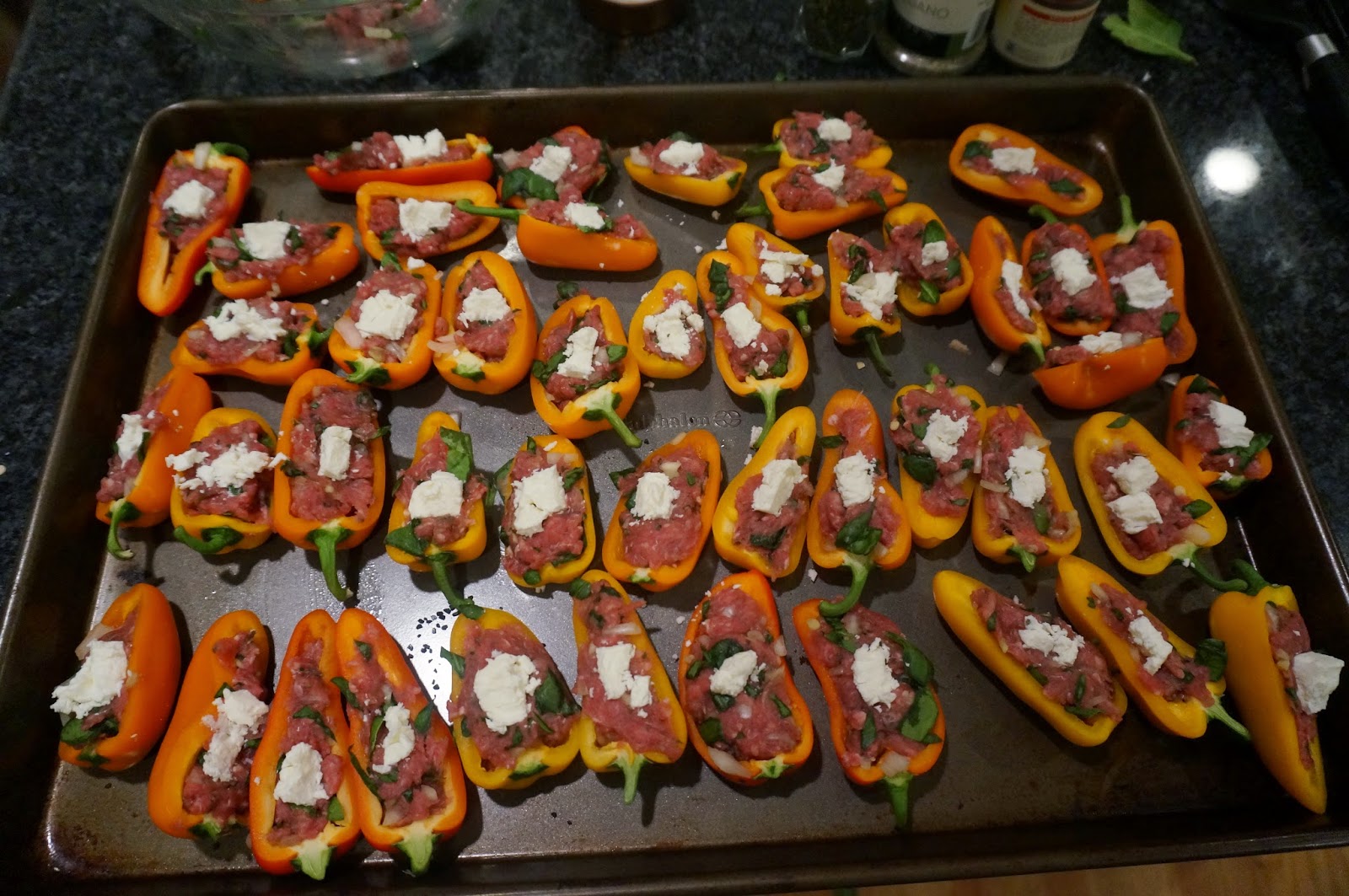 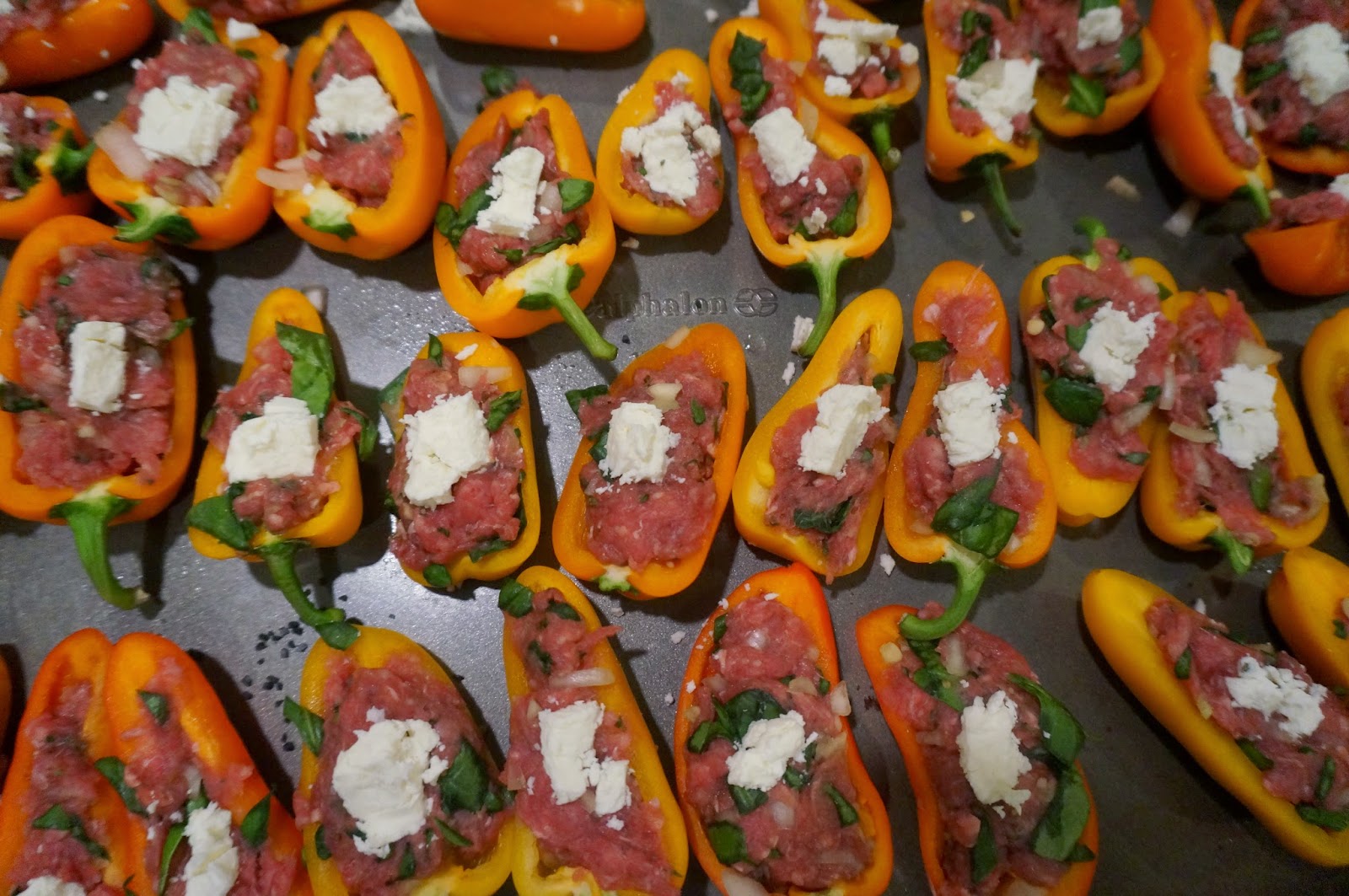 While the peppers are baking, make the sauce. Get your yogurt and cucumber. 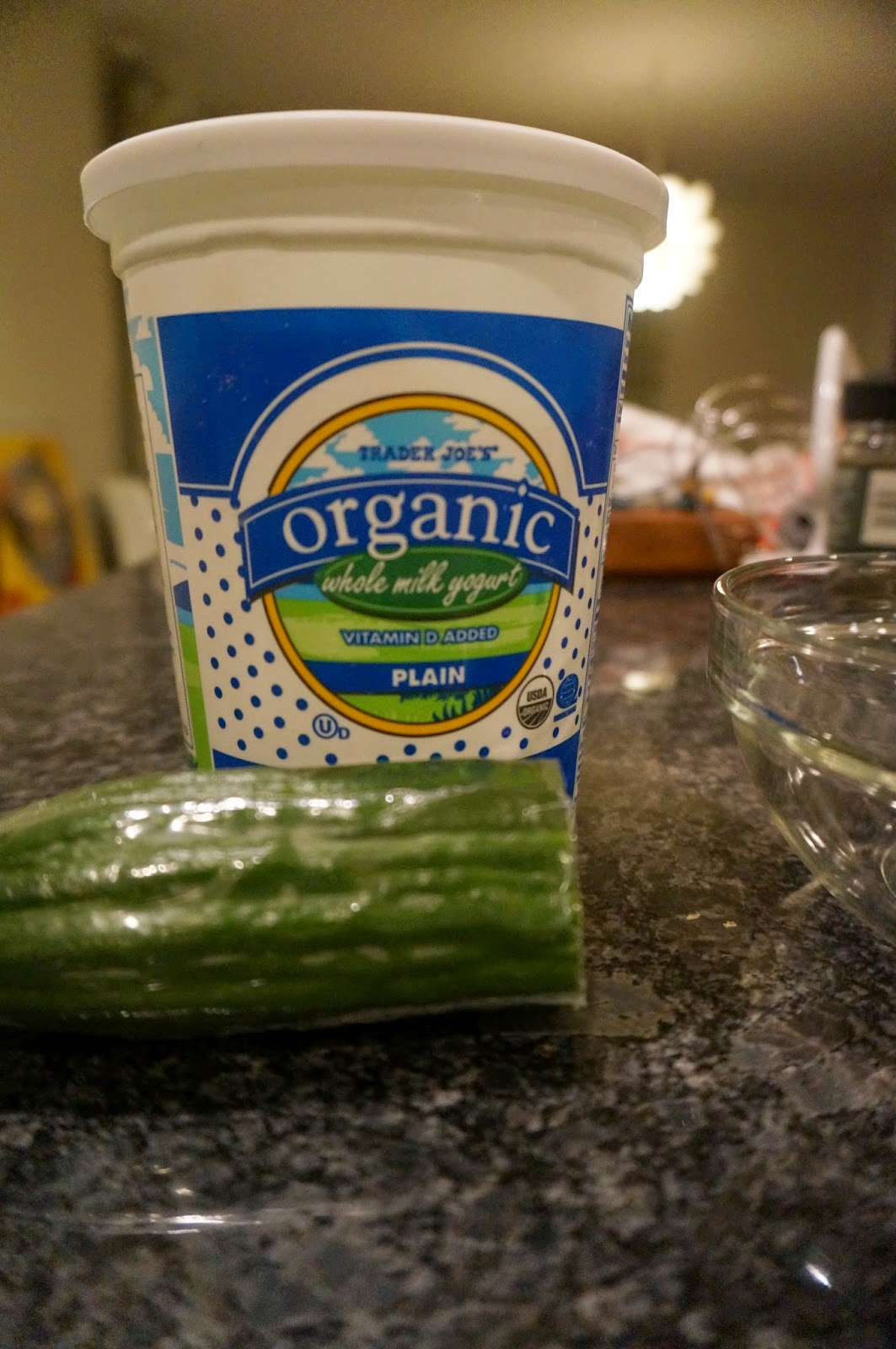 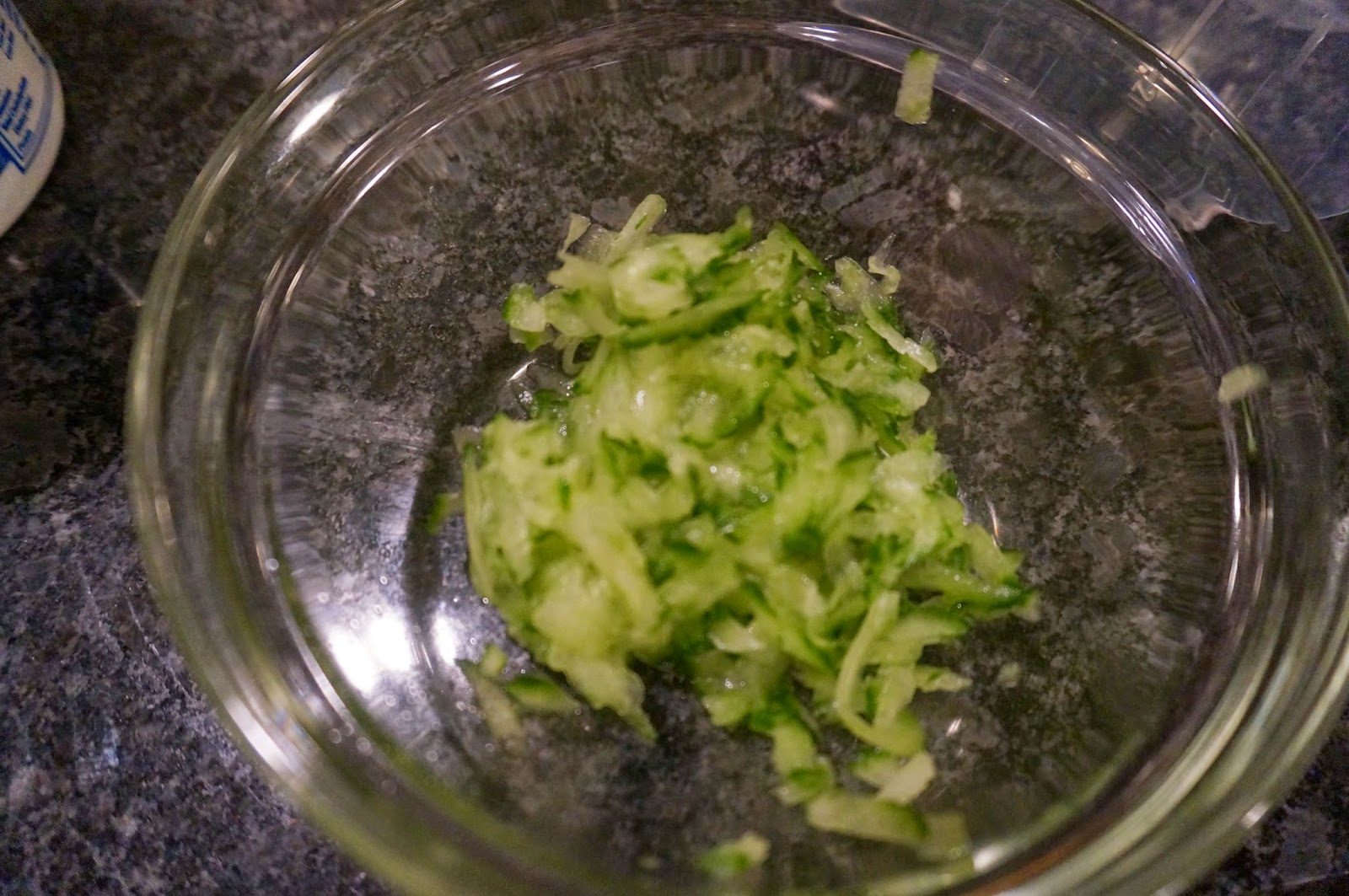 Add some yogurt, salt, and dill. Stir. Set aside. 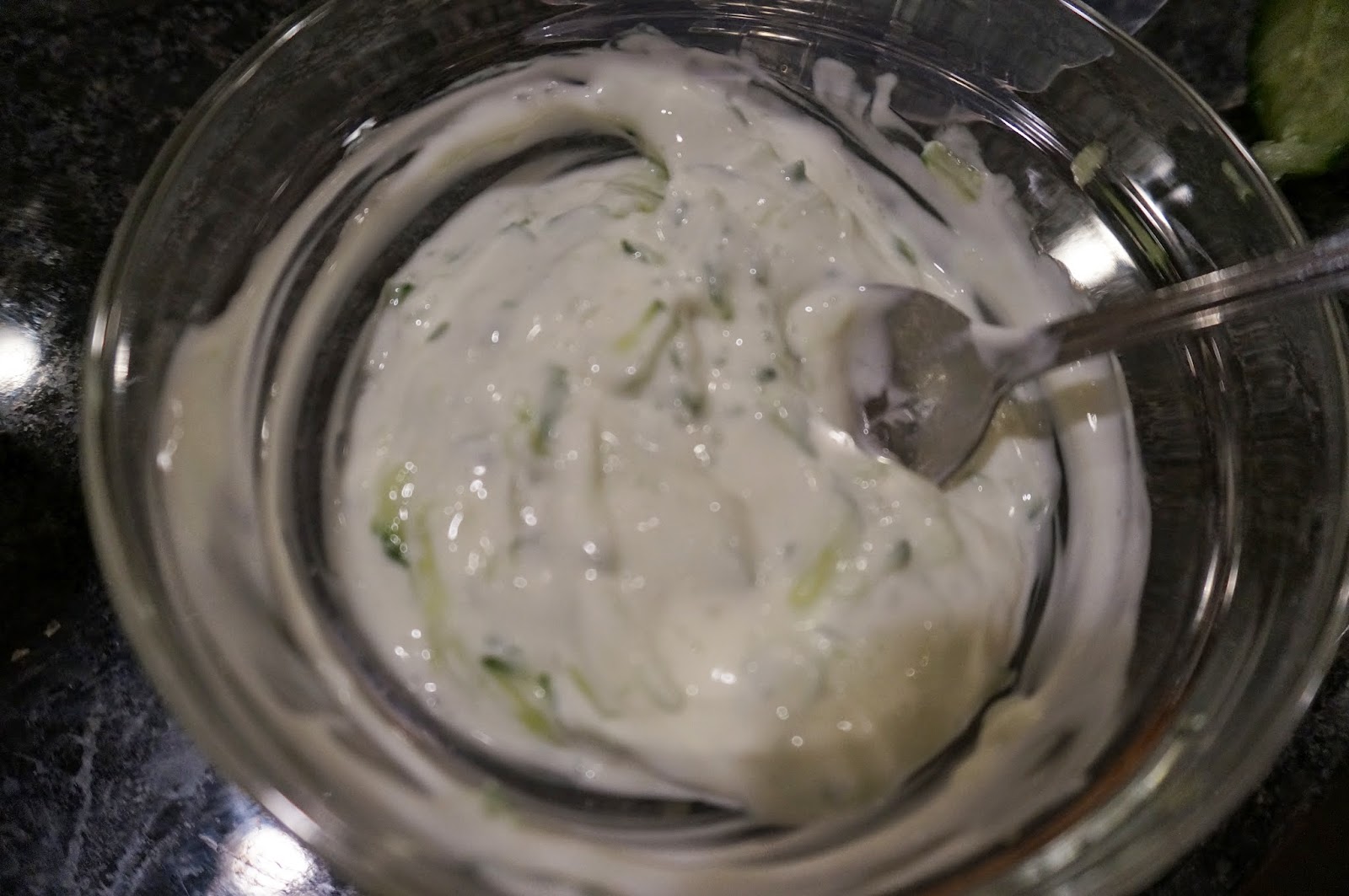 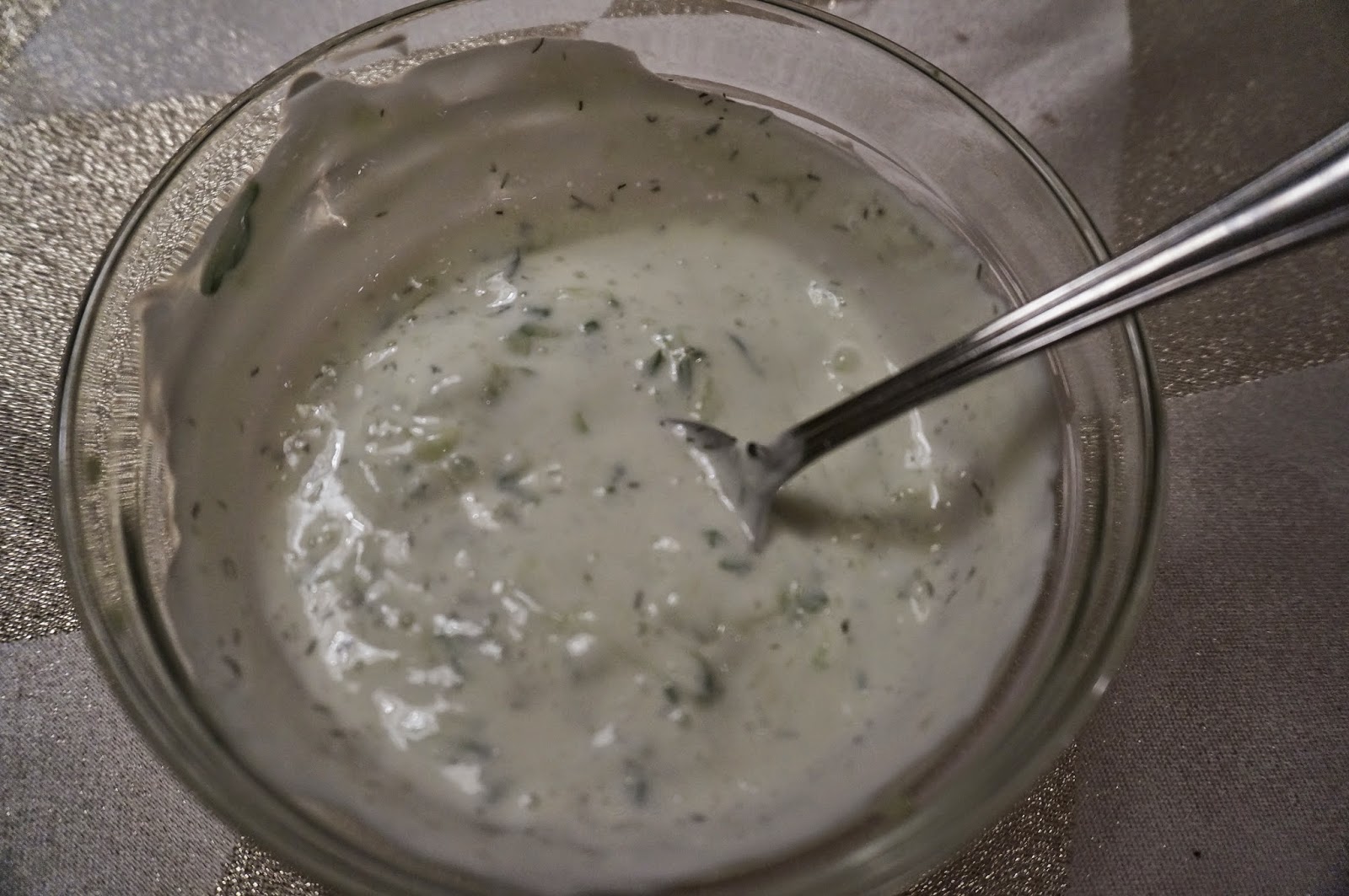 Take the peppers out of the oven. Don’t they look good? 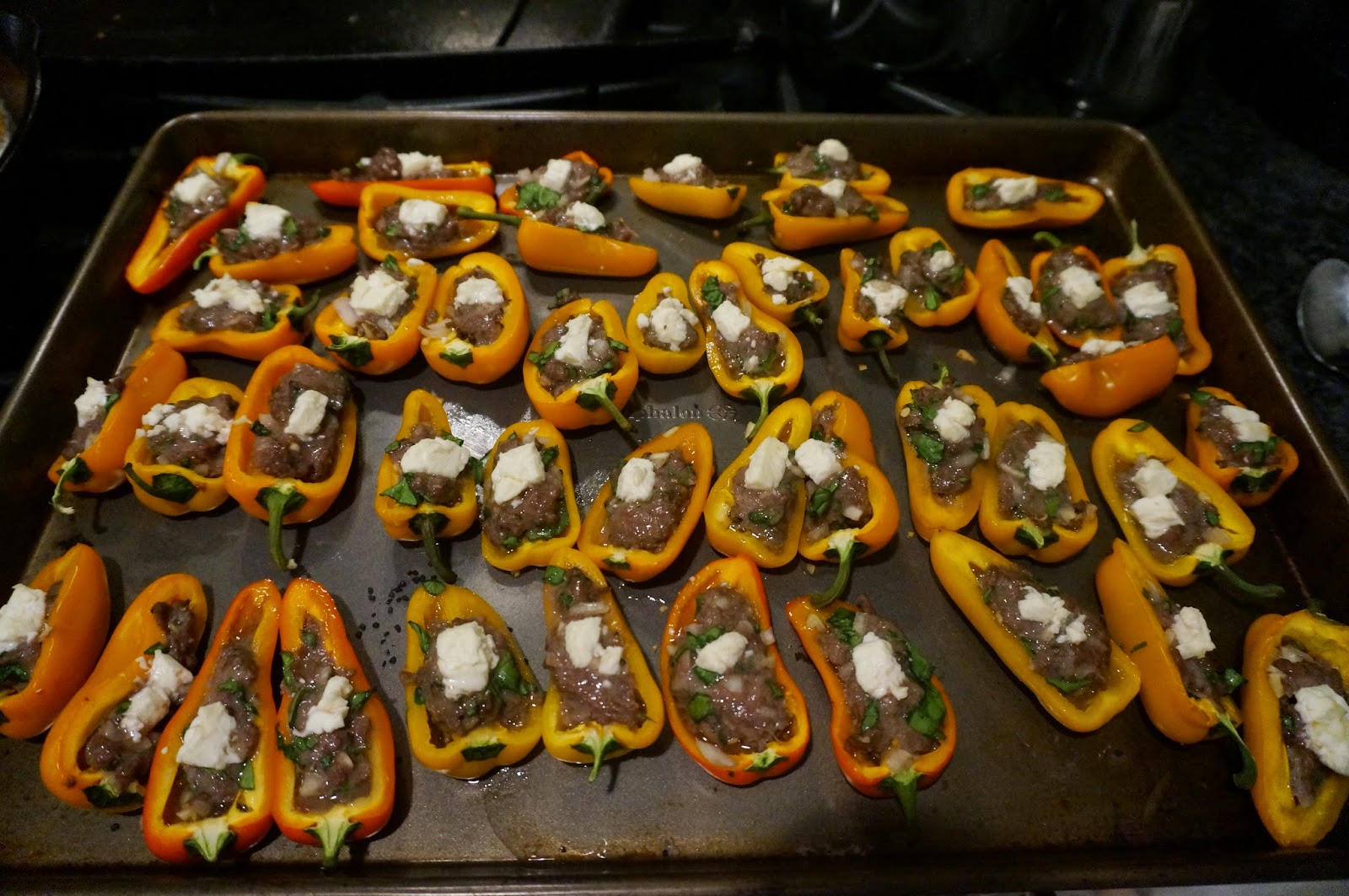 Serve with some of the dip. Mmm! 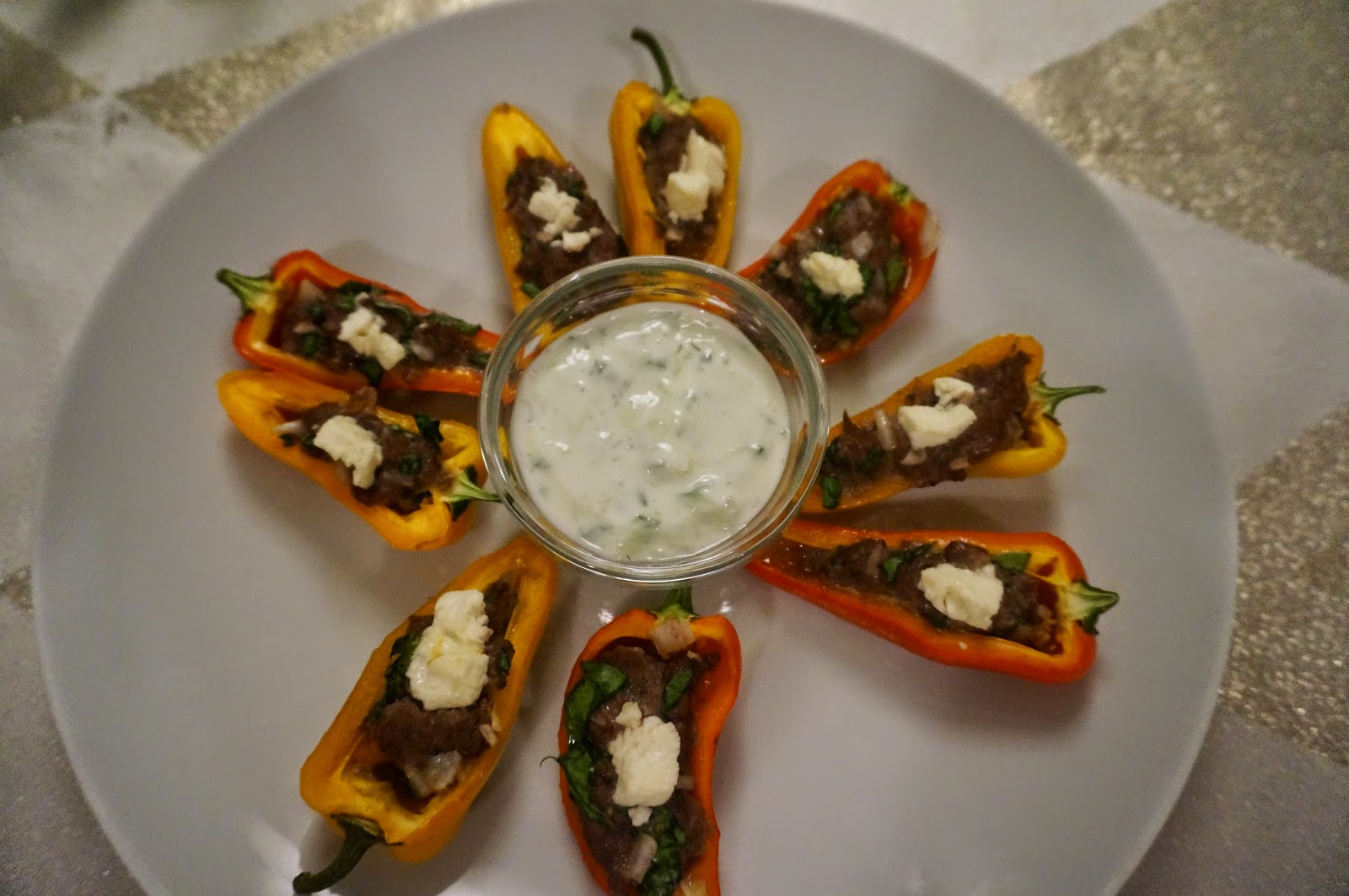 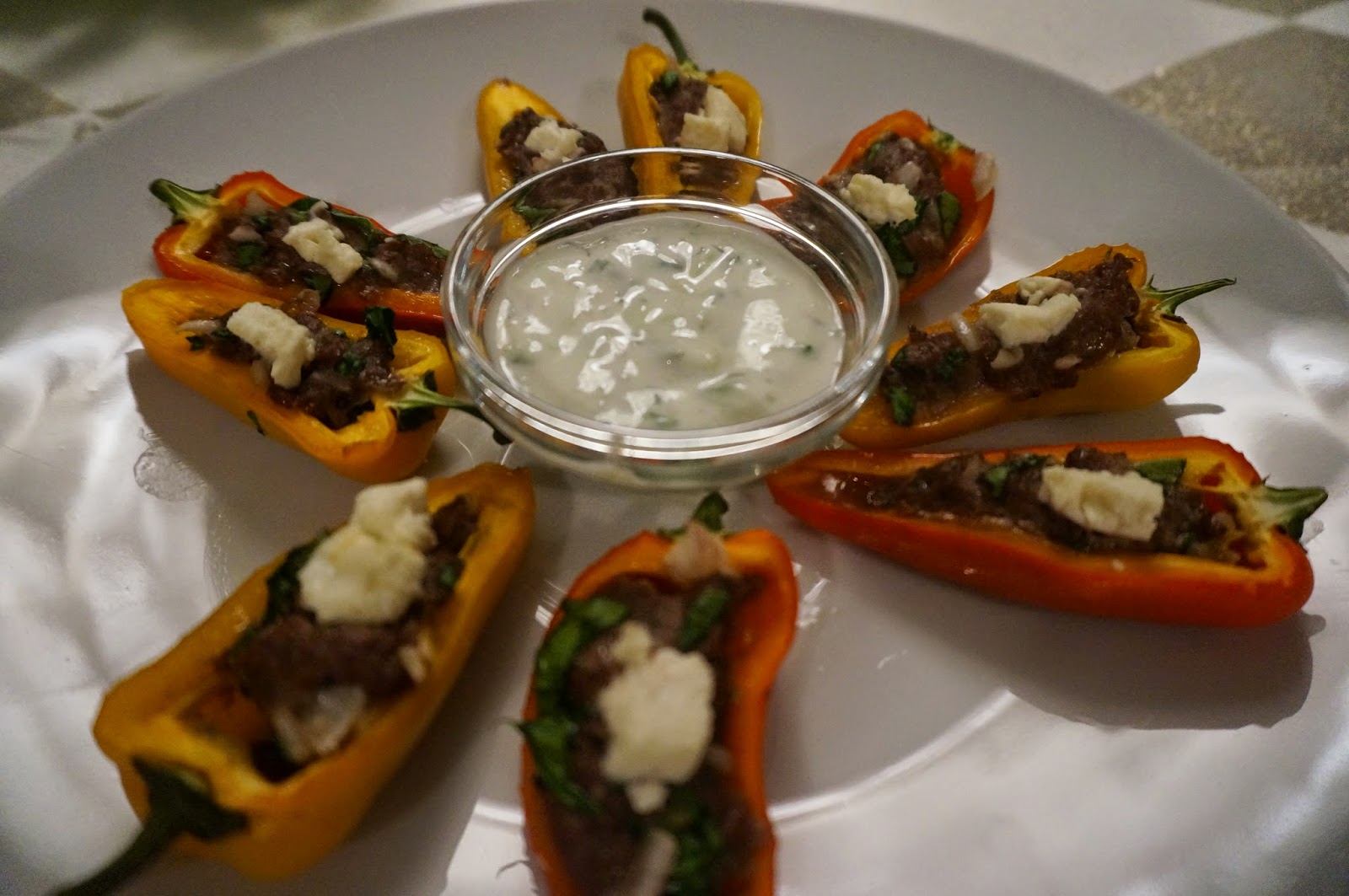 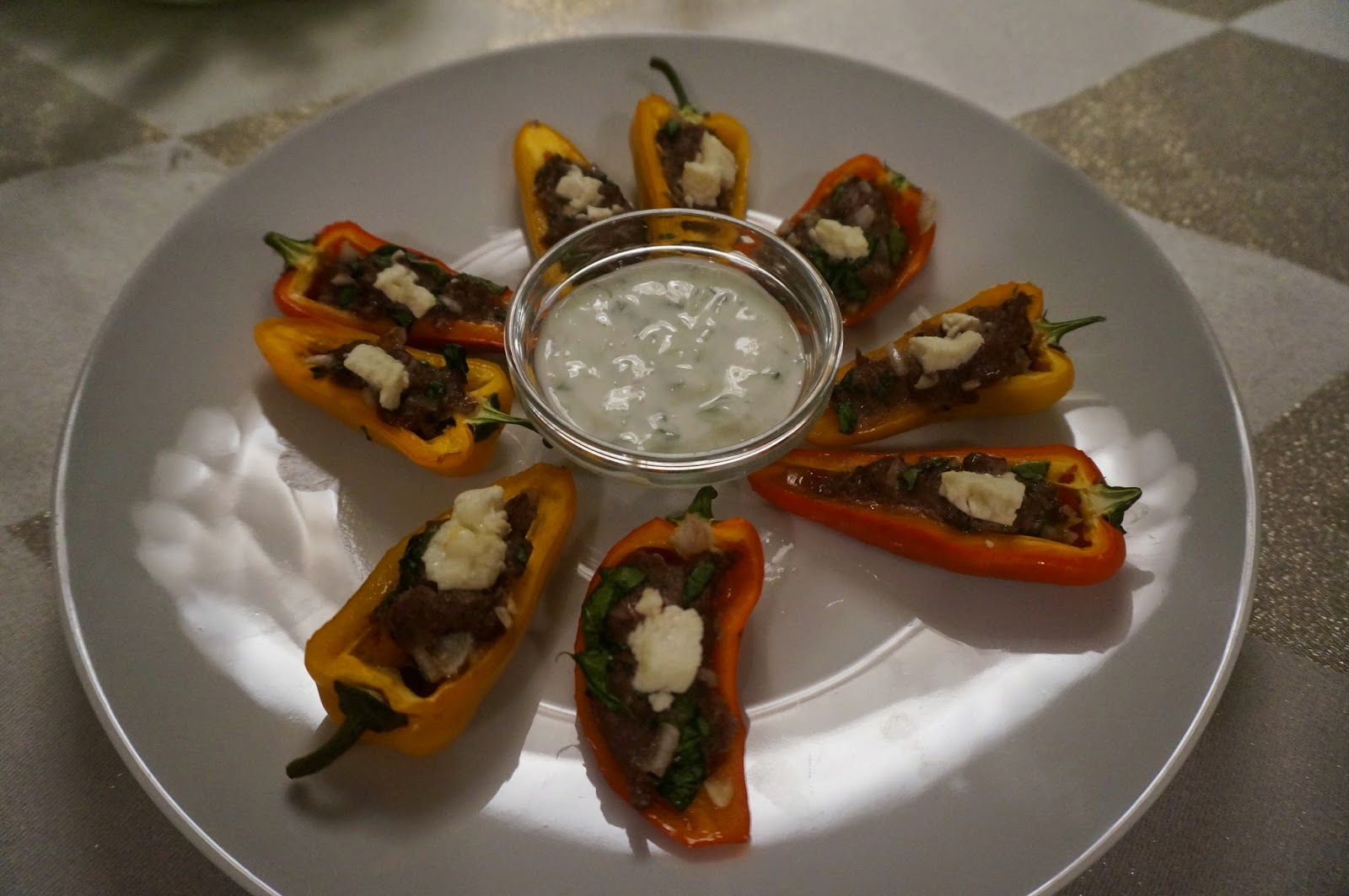 Greek Style Stuffed Mini Peppers
Makes approximately 45 pieces (serves 4 for dinner)
Prep time: 30 minutes
Cook time: 15 minutes
Ingredients:
2 small cloves garlic, minced
1/2 small onion, minced
Handful of baby spinach (maybe about a cup), chopped
1 teaspoon sea salt
1/2 teaspoon dried mint
1/2 teaspoon dried oregano
dash of allspice
a few dashes of black pepper
about 3/4 – 1 lb ground beef
A bag of mini sweet peppers (about 20-25 peppers)
About 2 oz feta cheese, cut into 1/4 inch cubes (approximately)
Preheat oven to 375 F. Combine the garlic, onion, spinach, salt, spices, and beef in a bowl and mix to combine (use your hands). Set aside. Meanwhile, cut each pepper in half lengthwise, and discard the seeds. Place them on a baking sheet. Fill each pepper half with some of the beef mixture (again, use your hands). Take a small square of feta cheese and place on top of each pepper, nestling it into the beef so it doesn’t fall off. Bake for 15 minutes, or until the meat is cooked through. Serve with cucumber yogurt dipping sauce (below).
Cucumber Yogurt Sauce
Ingredients:
3 inch piece of English cucumber
3/4 cup plain yogurt
salt
dash of dill
Grate the cucumber into a bowl using a coarse grater (keep the juice in the bowl, don’t discard it). Add the yogurt, a sprinkle of dill, and salt to taste. Combine together and serve along with the peppers.
Ways to improvise:
« Cream of Mushroom Soup
Sweet Potato Gnocchi with Tuscan Kale and Bacon »