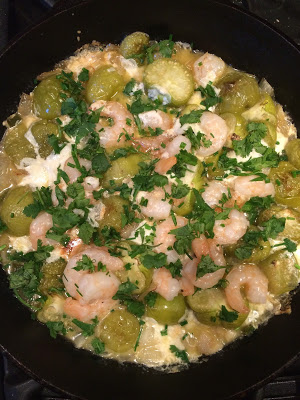 Fall is finally here! This is my favorite time of year to live in New England, and I’m sure most of you would agree that it really is beautiful. I’m in such a great mood that I thought I’d share a new recipe. Hooray. Admittedly, this isn’t very fall-ish, but I’m hoping you’ll make it anyway. Why? Because it’s easy, kind of different, and you trust me (I hope).

I know how to do one thing with tomatillos, and that is to make my tomatillo chicken. I bought tomatillos intending to make it, but alas, we have no chicken. So, I went on Pinterest (obvs), and found another tomatillo recipe. And, this one included shrimp, which I actually had! Some days you just win, and this seemed to be one of those days. Here’s the recipe I found for Baked Shrimp with Tomatillos. I modified it a little bit to accommodate what we had, and it turned out just fine.
My Facebook and Instagram friends probably saw the picture I posted of this recipe, with the claim that it is one of the easiest recipes ever. It really, really is. The techniques required to make this recipe include dicing onions and jalapeños, cutting tomatillos in half, and cubing up some cheese (though pulling it apart into bite-sized pieces with your hands is also perfectly acceptable). You also need to know how to sauté, and how to put a pan in the oven/take a pan out of the oven without getting burned. If you know how to do all of these things, you can make this dish with relatively little headache or effort. Impressively, there was very little mess in my kitchen, owing to the small number of ingredients, and the fact that I only used one pan. Not bad, not bad at all.
Here are some pre-recipe comments:
1) I honestly don’t know how many tomatillos I used, or what they weighed. If you’re off by 1/4 lb or so in either direction, it’s really not a big deal.
2) I thought we had feta cheese, but we did not. Instead, I used one of the FOUR wheels of Syrian cheese in my fridge. Why do we have that much Syrian cheese? I don’t know. For non-Armenians, Syrian cheese is pretty mild and salty, and tastes a little like queso fresco. It’s the only cheese we have that made even a little sense in this dish, so that’s what I used.
3) Shrimp: I used about 1/2 lb. I probably could have used a whole pound in here and still had enough sauce.
4) Unsolicited life advice: Buy a bag of frozen raw peeled and deveined shrimp, and keep it in the freezer for days that you don’t know what to make but need to eat quickly (i.e. all days when you are the parent of a toddler). You can easily defrost the exact number of shrimp that you need by just running them under cold water in a colander. I like sautéing them with garlic and red pepper flakes, and adding them to pasta.
Add olive oil, diced onions, and jalapeños to a cast iron skillet over medium heat, and cook until the onions become translucent 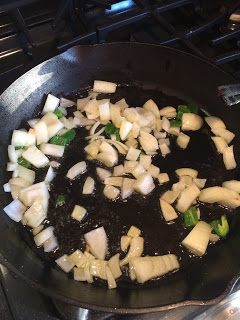 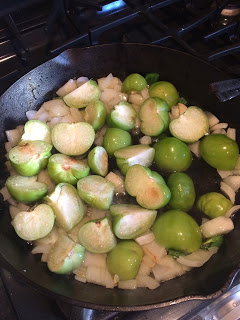 Add shrimp and diced cheese to the pan, stir, and bake for 10 minutes 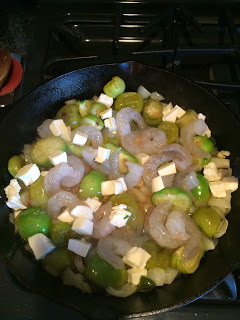 Remove from the oven and garnish with cilantro and chives 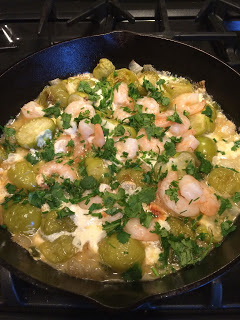 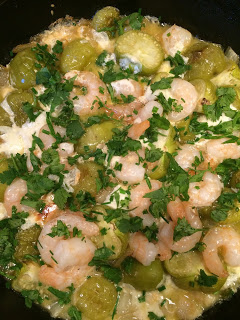 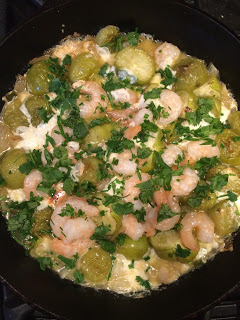 Shrimp in Tomatillo Sauce
Serves 2-3
Prep time: 20 minutes
Cook time: 30-35 minutes
Ingredients:
2 tablespoons olive oil
1 medium onion, diced
1 jalapeño, seeded and diced
2 cloves garlic, smashed
1/4 cup water
About 3/4-1 lb of tomatillos, husked and cut in half
1/2 lb peeled and deveined raw shrimp. They can be any size, but mine were 31-40 (meaning that’s how many are in 1 lb)
about 1/4 lb of mild, salty cheese (I used Syrian cheese, but queso fresco or even feta would be good), cut into bite sized pieces
a handful of cilantro leaves, chopped
1 tablespoon of diced chives (optional)
salt and pepper
Preheat the oven to 425F. Pour the olive oil in a cast iron skillet over medium heat, and allow it to heat for about a minute. Add the onions and jalapeños, and stir, cooking until the onions begin to turn translucent (about 4-5 minutes). Add the garlic, water, tomatillos, and about 1/4-1/2 teaspoon salt. Stir, and then allow to cook until the tomatillos soften, about 10-15 minutes. Add the shrimp and cheese, stir again, and then place the whole pan in the oven. Cook for 10 minutes, until the shrimp is pink and opaque, and the cheese has melted. Salt to taste. Garnish with the cilantro and chives. I served this on top of rice, but it could be eaten on its own, or in a taco or burrito.
« Dolma
Apple Chips »