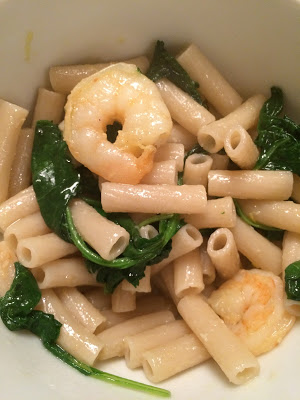 The time between Thanksgiving and Christmas always seems to be the busiest and most stressful time of the year. I’ve been trying to cram as much as I can into this short period, and by the end of each day I feel like I can barely keep my eyes open. At home, one of the biggest challenges has been dinner prep. Unfortunately, my favorite (and only) pastime–cooking (I’m spelling it out for you)–has become a nuisance. It’s almost impossible to get home from work at 6:00 PM and have dinner ready within half an hour, unless you order out or cook everything ahead of time (still impossible). Why half an hour, you ask? We are “required” to have dinner by 6:30 PM, or else we risk a complete and total toddler meltdown, because we are unfortunately not European. So, I decided to focus my life-hacking strategies in this area, at least for the next few weeks. I had three goals: 1) come up with easy meals that my husband can make on nights that I am working a little later, 2) come up with meals that I can make on nights where I get home earlier, and 3) find a creative way to make enough food for leftovers for lunch or even dinner the next night. As someone who flies by the seat of her pants (in the kitchen, anyway), this was basically an impossible task. I sat down, drew a calendar, and thought. A lot. More literally, here is what I had to do:

My first decision was to make this Greek Marinated Chicken with roasted carrots and potatoes on Sunday. The prep was quick, but it took a little while to cook in the oven, so Sunday was the right time. I planned to use the leftover chicken in my Chicken Pot Pie Soup the next day. I prepped ahead by making the soup base on Sunday, and leaving instructions for my husband to add the veggies and chicken on Monday night. Easy. I knew I would be home early on Tuesday, and figured I could make some kind of quick pasta with shrimp and kale, leading me to the recipe below. Wednesday night, my husband could make Turkey Chili, which is pretty straightforward. That’s as far as I got, but it’s not a bad start for someone who has never done this before!

The recipe I have for you today is what I made on my night: Garlicky Shrimp and Kale Pasta. I wanted something that would be quick and painless, and this was it. Amazingly, despite my best efforts at meal planning, I did not realize that we had no pasta in the pantry. Never fear though: I found the gluten-free pasta that I keep for my sister, in case she comes over for dinner, so I gave it a try. It tasted just like regular pasta, which was great, so it was no problem at all.

As for my toddler: even he liked this! He mostly ate the pasta over the shrimp and kale, but I sent leftovers to daycare with him a few days later, and he ate almost everything.

Saute shrimp and garlic in some olive oil 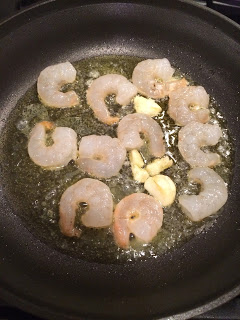 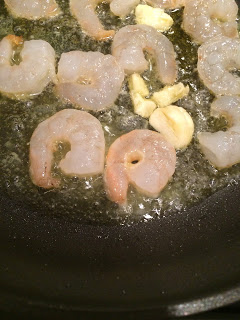 Flip them over when the first side turns pink 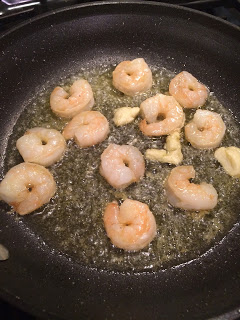 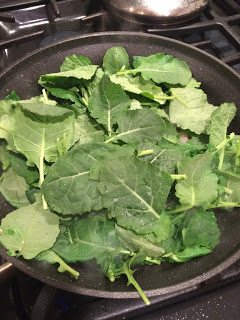 It will wilt down quite a bit, so add more than you think you’ll need 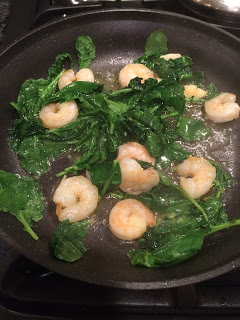 Toss in cooked pasta and lemon zest and serve 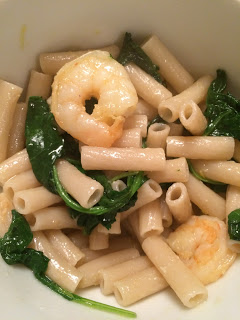 Bring a pot of water (big enough to hold your pasta) to a boil over medium-high heat. Meanwhile, add the olive oil and garlic to a large non-stick sauté pan over low heat. When the water begins to boil, generously salt the water and add the pasta and cook according to the package directions (set the timer to whatever time the package says to “al dente”). Meanwhile, turn the heat up on the olive oil to medium, and add the shrimp and sprinkle with salt. Cook the shrimp for about 2 minutes (don’t touch them), or until they start to become opaque on one side. Flip the shrimp over, and continue cooking for another minute before adding the kale. Allow the shrimp and kale to cook for about 1 more minute, and then stir to get all of the kale in contact with the pan. At this point, if your pasta still has more than another minute to cook, turn the heat on the sauté pan to low until the pasta is ready. Otherwise, if the pasta is ready, drain it and add it to the shrimp and kale, and toss to coat the pasta in the oil. Top with lemon zest and stir to combine. Serve.