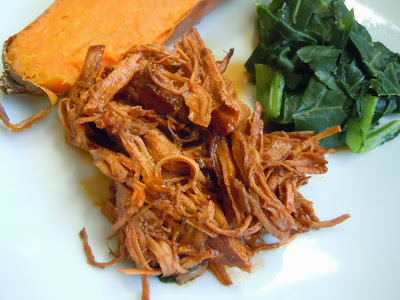 I decided to take a much needed break from board studying to give some TLC to this blog. Sadly, the pediatric boards are in just under one month, and my brain is brimming with useless facts about diseases I’ve never seen (pseudohypoparathyroidism?). Rather than cramming any more medical information into my aching head, I figured I would spend time here, in blog land, talking about my favorite subject: food.
I made this Pulled BBQ Chicken recipe months ago, and then got busy and never posted it.  I was looking through some pictures on my camera and was reminded of how awesome it was, so now I’m bringing it to you! Sadly, the pictures don’t do it justice. Specifically, I didn’t take pictures of the raw ingredients, because I threw everything in the slow cooker and ran out the door to work the morning I made it. Oops. In my defense, the ingredients weren’t much to look at anyway.
Usually, if I make “pulled” anything, it’s pork (see slow cooker pork). Unfortunately, there’s a lot of fat in pork, so I wanted to try something lighter. Since there’s so much flavor in BBQ sauce, I decided to try this recipe with lean chicken breasts. I figured that the sauce would mask the lack of (delicious) fat in the meat, and the result would be (almost as) equally delicious. I was right. I think I could have substituted a shoe for the chicken, and it still would have tasted great. That might be an exaggeration, but you get my point.
I spiced up the bottled BBQ sauce by adding some apple cider vinegar and molasses. If you don’t have molasses, or vinegar, or just don’t care to make the recipe more complicated than it needs to be, you don’t need to use them. Instead, you can just substitute extra BBQ sauce.
This is what I did:
Pour BBQ sauce, water, cider vinegar, and molasses in the slow cooker. Whisk together with a fork. Add two raw chicken breasts, cover with the lid, and turn to low (sorry, no pictures). Go to work. Daydream about how good your house will smell when you get home.
When you get home, hopefully 6-8 hours later (if you only work 6 hours, that’s awesome), open the cover. See mostly intact chicken breasts in a delicious sauce. 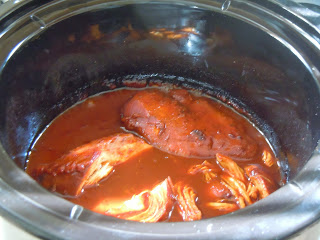 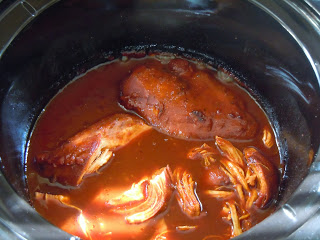 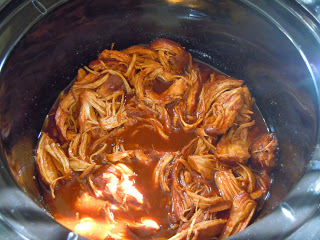 Serve with healthy-ish sides (if you wish), liked baked sweet potatoes and sautéed greens. Alternatively, you can make this into a sandwich with some pickles. 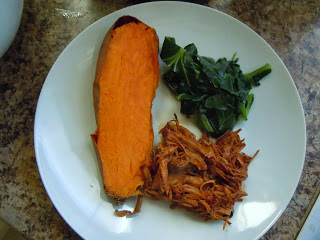 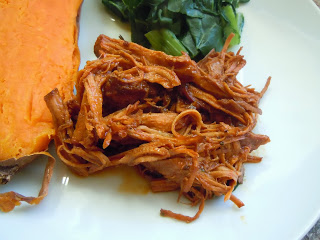 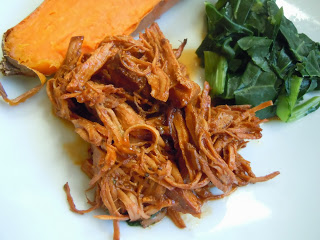 Combine BBQ sauce, water, vinegar, and molasses in the slow cooker, and stir with a fork until all ingredients are combined. Place the two chicken breasts side-by-side in the slow cooker, making sure there is enough liquid to almost cover or fully cover the chicken.