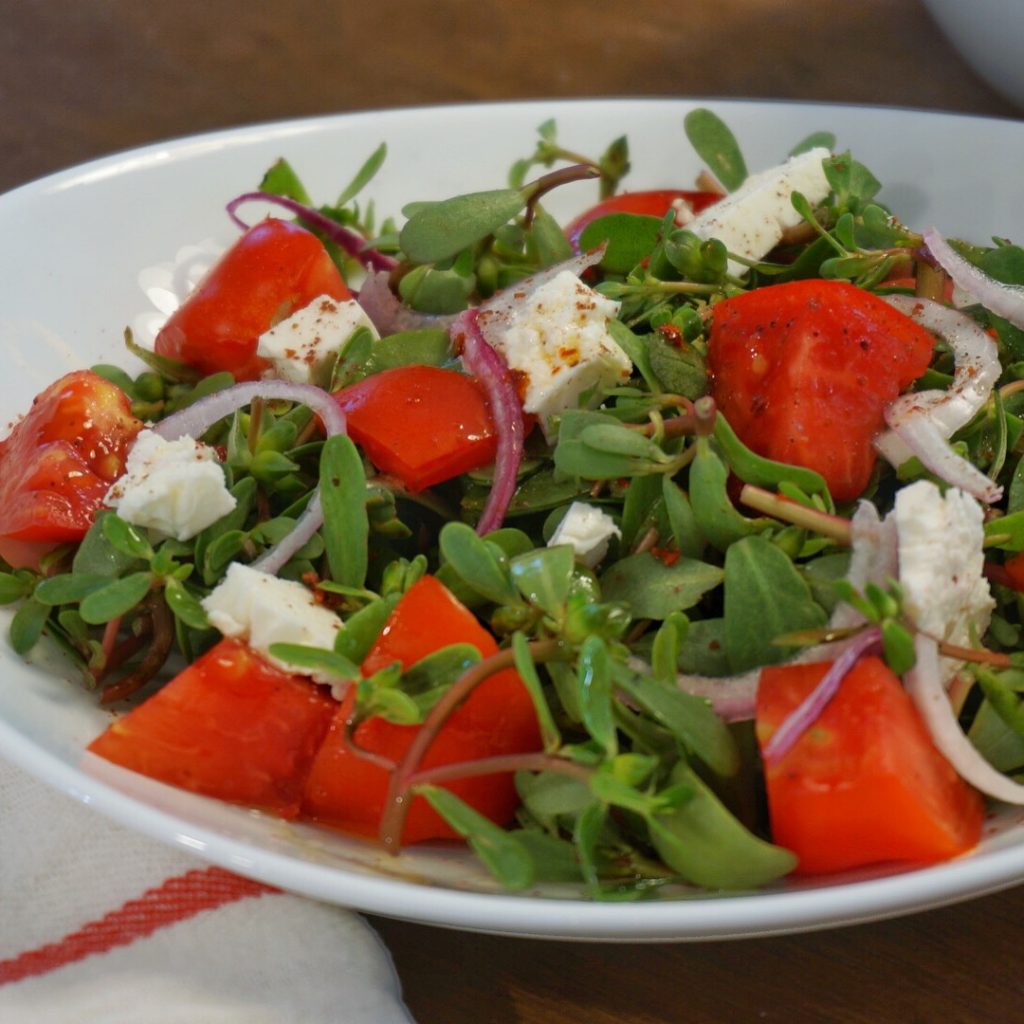 Every summer I look forward to the bounty of fresh vegetables from the farmers market. While Massachusetts may not have a long growing season, we do have lots of locally-grown produce each summer, and I try to take full advantage of it. Salads, grilled zucchini and eggplant, and plain old cut up cucumbers and tomatoes are some of our favorite summer dishes.

Growing up, we never had a vegetable garden or a farmers market. My mom occasionally grew basil or tomatoes in pots outside, and mint usually took over the landscaping in the back yard. The best treat of all, though, was what grew in cracks around the driveway and near the street: a weed called purslane, or what we knew as perper (pronounced PER-per, rolling the “Rs”). My mom would add tomatoes, red onions, and vinegar, transforming the peppery weed into a flavorful salad. I loved it, and looked forward to the one or two times each summer that we would find enough perper to make this salad.

Skipping forward a few years, farmers markets, and veggies in general, are on trend. I have done everything in my power to leave work early enough on Thursdays to make it to my favorite market in Belmont, MA (and now no longer work on Thursdays, so high five to me). When I first started going to the market, I intended only to buy the usual things, with the hope that they would taste better than the veggies from the supermarket. Then, one day, while examining some leafy greens from Flats Mentor Farm, I saw the most glorious sight: a massive bunch of perper. OMG. Did somebody actually grow this weed on purpose? Finally, I could actually buy it, not having to wonder what disease I might contract from eating a weed picked from the sidewalk in front of my house. And, there would be enough to actually make more than one serving of salad!

Before I could buy it, though, I had to confirm that this was, in fact, perper. Yes, it’s true: I didn’t know the name for perper in English. The last time this happened to me was when I was 2, and did not know the English word for yogurt. I think I called my grandmother to confirm that, in fact, purslane was perper, and then quickly paid the vendor for one of the few bunches that he had. I proudly brought it home to my husband, who had never seen perper in his life, and to this day, doesn’t really like it all that much (but eats it anyway because he is the best husband ever).

In case you are wondering, purslane is full of omega-3 fatty acids and a host of other nutrients. Don’t believe me? Read this article, or just go to pubmed.gov and search for “purslane”. My salads are sure to balance out all of the Sour Patch Kids and pizza that fill the remainder of my diet.

I know that some Armenians and Middle-Eastern people make fattoush out of their purslane. This salad is very similar to fattoush, but without the toasted pita bread. The ratio of the ingredients can be changed to suit your tastes, so play around with it and see what you like. 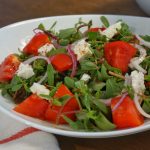 Easy Vegetarian Tortellini Soup is an incredibly flavorful 3 ingredient weeknight meal that takes only fifteen minutes from start to finish. Easy weeknight meals are the name of the working mom game, and I’ve got a good one: Easy Vegetarian Tortellini Soup! With three ingredients and fifteen minutes, you can get this on the table…