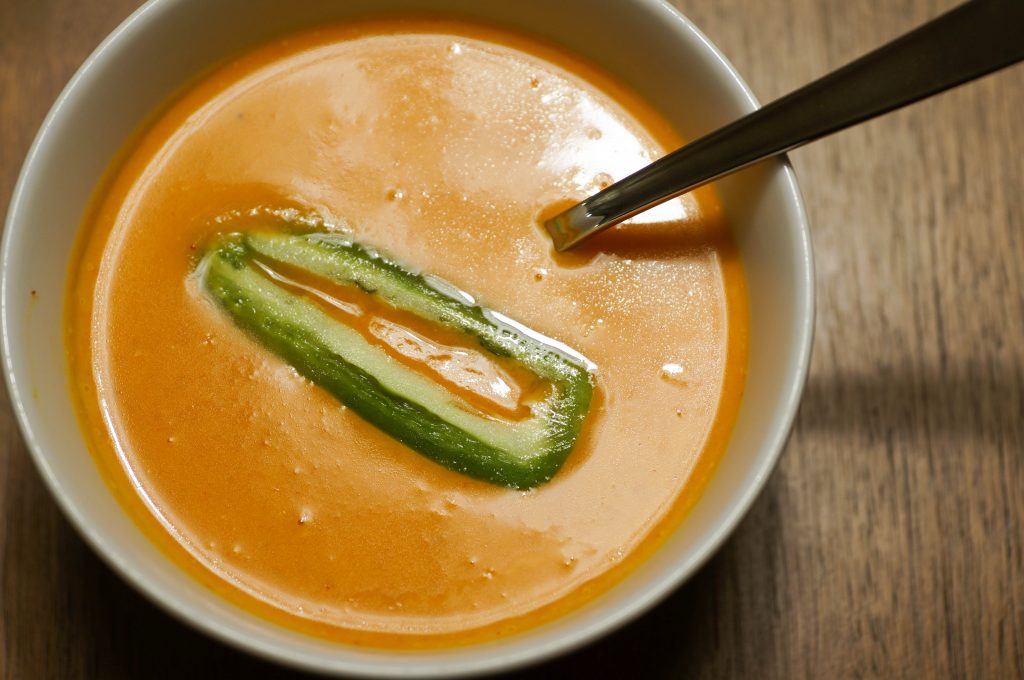 Does anyone else feel like they’re surrounded by pumpkins and gourds everywhere they go? Maybe it’s just me, since “everywhere I go” = the farm store and farmer’s market (and work), but pumpkin-mania has definitely shown itself. My son, who is 2, loves to point out every pumpkin he sees, classifying them as baby pumpkins or BIG pumpkins (said in a very BIG voice, which is adorable). He generally follows his observations by asking to buy one, which I usually respond to by distracting him with something else, like blueberries or strawberries (he likes fruit, so it’s easy). Until this weekend, I was frankly too lazy to pick up a bunch of big, heavy pumpkins at the store, making sure they were “good” pumpkins without lots of marks, that they’ll go with my vision of a perfect New England fall front doorway, etc. etc. If I can’t make perfection happen, why am I going to try at all, right?

Well, lucky me (and everyone in my neighborhood who’s sick of looking at my boring, undecorated house), but my husband and I were actually both home today, the weather was pretty great, and we had run out of excuses not to spruce up our place. After a delicious pumpkin spice-themed breakfast at Uncommon Grounds, we headed over to the gourmet store to buy some pumpkins and mums. What ensued was us spending the most money any normal person has ever spent on pumpkins and mums EVER, because who knew that creative-looking white and green pumpkiny-gourds cost like 3x the amount of a normal orange pumpkin? It all seemed fine while we made this ridiculous purchase, since I envisioned our house looking like something out of the perfect fall Pinterest board. The reality, though, was that it looked like a blue Harry Potter-esque diseased gourd melted over the edge of our stairs, while the rest of the Island of Misfit Pumpkins crowded around to watch. Don’t even get me started on the mums, which will hopefully bloom before the first snowfall; since they’re partially obscured by our still green burning bushes, I’m sure no one can even tell that they’re mostly buds. After all was said and done, I’m glad I kept my day job. If I manage to make things look more normal in the next few days, I’ll share a picture.

After a depressing half an hour of outdoor decorating, we (I) moved to the dining room table, where I had envisioned creating the fall tablescape of my dreams. Sigh. While it certainly looks better than it did a few hours ago (thank you, HomeGoods), it was only today that I realized that I’ll never be a home decorator/lifestyle guru.

So anyway, none of that has anything to do with my recipe, but I decided to share it for 2 reasons. First, I have so many different pumpkin and squash recipes that I’ve been saving up for fall, and the story of my last few weeks reminds me (and you) of how relevant these recipes really are (because we are surrounded by pumpkins and squashes–not because I am a terrible decorator). Second, this recipe is so easy that it would be a pretty boring post if I didn’t share something else. So there.

Last weekend, my husband and I got away for a very mini two-day babymoon in Stowe, Vermont. Neither of us had been to Vermont (unless you count when I was a toddler), so it was quite an exciting little trip. Aside from some awesome leaf peeping, we ate a lot of great food–something you can do when you leave your 2 year old with his grandparents. I had a great Thai inspired squash soup at one restaurant (which I posted on Instagram–please follow me if you don’t already. Thanks), and I decided to make something similar at home.

This recipe has THREE ingredients, if you don’t count water and salt. Three. 3. Two of the ingredients are canned, and one is in a jar. It’s so easy that I can’t even handle it. If you weren’t reading all of this nonsense, you could have actually made it by now.

These are the ingredients, in my very real background (fruit basket, paper towels, husband, highchair–this is life, people). 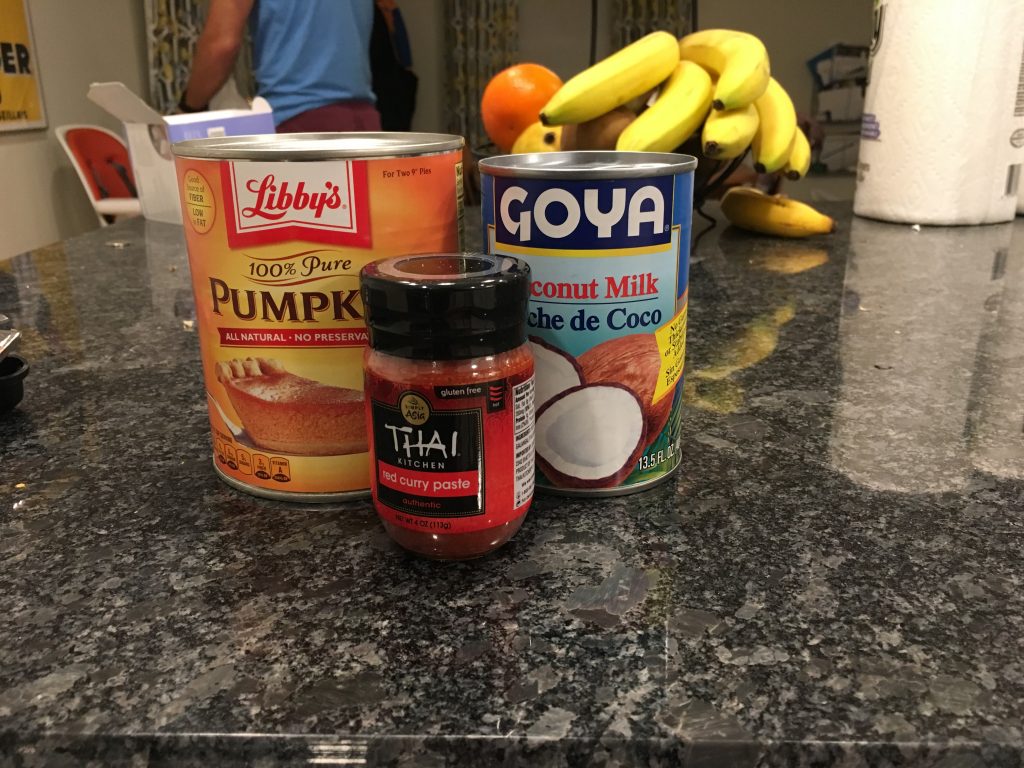 Put them all in a pot with some water. Stir, bring to a simmer, add some salt, and serve. DONE. 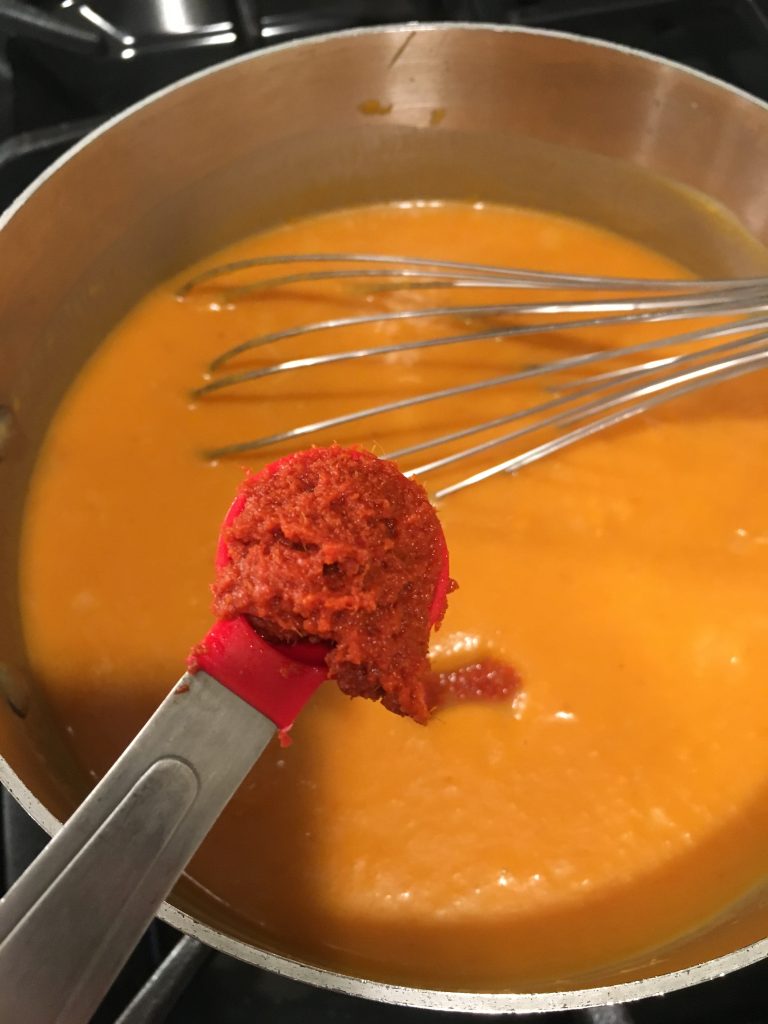 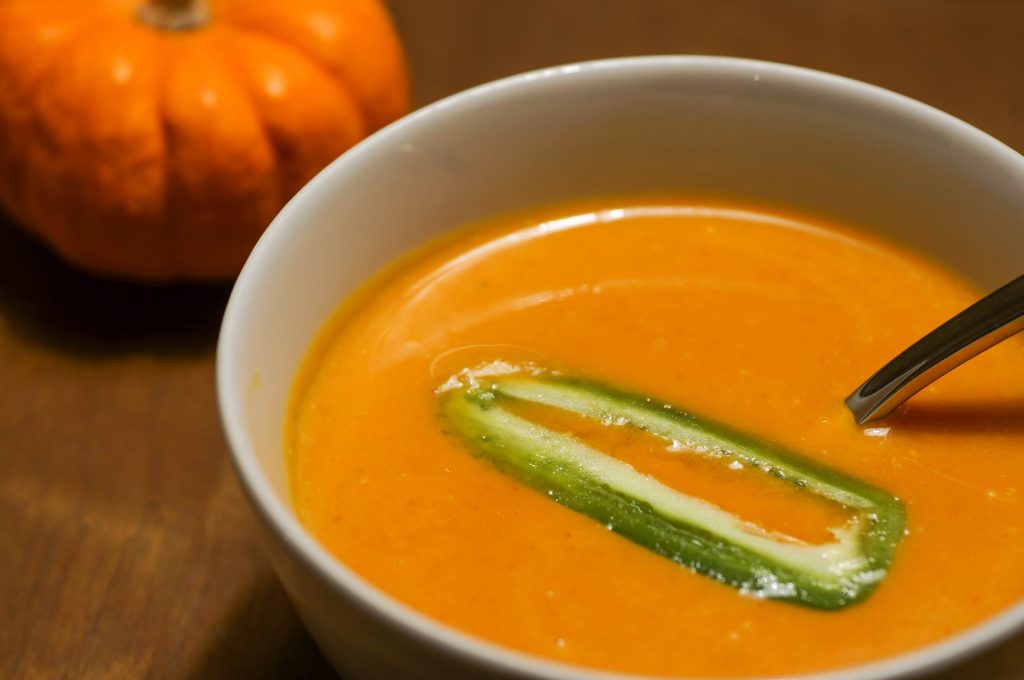 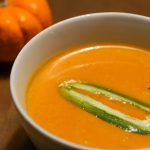