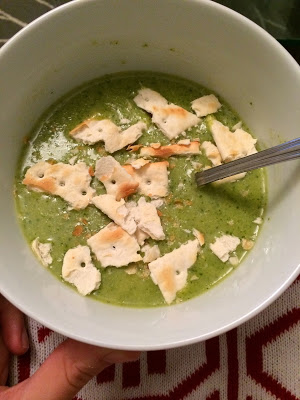 Happy Saturday! Just posting a quick recipe to start the weekend off right. Last night, I was by myself and (oddly) craving some vegetables. One idea led to another, and I ended up making this easy and pretty tasty soup. The color was such a pretty bright green, that I took a picture and put it on Instagram and Facebook. That generated at least a tiny amount of interest in the recipe, so I figured I would post it here.

Unfortunately, I didn’t take any pictures while I was preparing the soup. As you may have guessed, it adds a considerable amount of time to the cooking process when you have to stop and take a picture of everything you’re doing. In this case, the recipe is so easy that I doubt anything will be lost without pictures.
I call the soup light(ish) because it’s not very heavy or creamy. If you use sharp cheddar cheese, you only need to use a small amount to get the cheddar flavor. I used a slurry of olive oil and flour to thicken the soup, which ended up working very well. And, I avoided using cream because I really didn’t think I needed it. You can add some if you want, but the soup won’t be quite as light.
I hope you enjoy it as much as I did!
Light(ish) Broccoli Cheddar Soup
Serves 2
Total cook time: 15-20 minutes
Ingredients:
1 head of broccoli (about 2 cups), cut into small florets and most of the stem diced
1 14 oz can low sodium chicken broth
1 tablespoon olive oil
1 tablespoon flour
about 1/3 cup shredded cheddar cheese (I recommend sharp)
Salt and pepper to taste
Place the broccoli and chicken broth in a medium sized pot over medium heat and bring to a boil. Allow it the broccoli to boil until tender, about 7-10 minutes. Turn off the heat, and puree using an immersion blender (also called a stick blender) until smooth. It should be a very thin consistency at this point. Return the heat to medium low.
In a small bowl, mix the olive oil and flour until smooth. Stir the mixture into the soup for about 1 minute. Stir in the cheese, and continue to stir intermittently for another 2-3 minutes until the soup has a thicker consistency. Add salt and pepper to taste, and serve with some crackers.
Some tips:
« Eggplant Baked Pasta
Slow Cooker Pork Tenderloin »