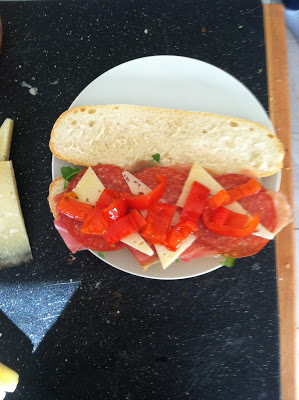 It’s Saturday. I woke up later than I have in for-ev-er, and I have a call-free weekend (no work, no need to carry a pager. Amazing). So, it made sense to me to try to cook something for lunch. All I could think about eating, though, was a sandwich that I had at ink.sack (http://mvink.com) in LA a few weeks ago. I’m a sucker for celebrity chef-owned restaurants, and could hardly wait to try the sandwiches at Michael Voltaggio’s restaurant, located very conveniently near my sister’s apartment (shout out to V). I ordered the Jose Andres, which was a delicious combination of serrano ham, chorizo, lomo, and manchego cheese, along with roasted red peppers and lettuce on a fresh roll. Since I couldn’t think of anywhere to buy a similar sandwich today, I decided to make it myself. I went to Russo’s (http://russos.com, the BEST market ever and only place to buy produce in the Boston area, in my opinion) to buy the ingredients. I made a few substitutions; hot salami for chorizo, arugula for romaine, and pickled red peppers for roasted. I omitted the lomo altogether.

Do I consider this cooking? Not really. It was more like assembling. But it was probably the best idea I had all day, and good food is good food. My husband and sister agreed.
The Almost Jose Andres Sandwich
Makes 2 sandwiches
Ingredients:
2 sub rolls. I used fresh, slightly crusty rolls that looked more like demi baguettes
8 slices serrano ham (you can use prosciutto if you’d like)
8 slices of hot salami (I used this instead of chorizo)
6 slices of manchego cheese
1.5 pickled red peppers
1 big handful of arugula
a pinch of oregano
a splash of olive oil
First, slice the baguettes in half lengthwise. 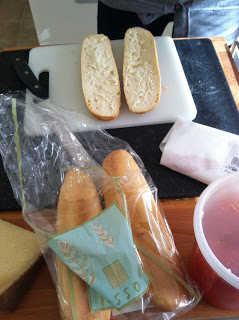 Next, slice the cheese, which likely comes in a wedge. You can slice it as thick or as thin as you’d like. 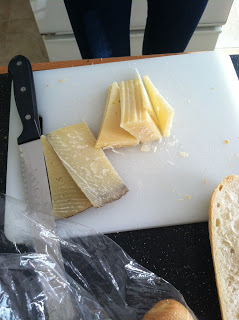 Then, cut the red peppers into a small strips. Add the oregano and olive oil and mix. 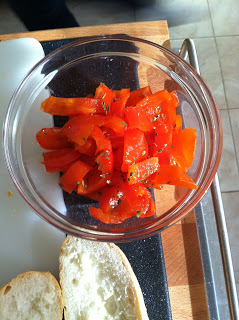 Now, you’re ready to assemble. Start by placing half of the arugula on each roll. 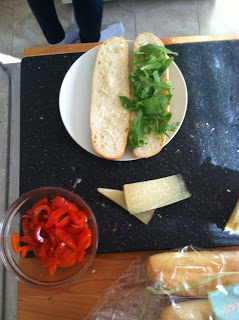 Next, add 4 slices of the ham, each folded in half, and then four slices of salami, to each sandwich. 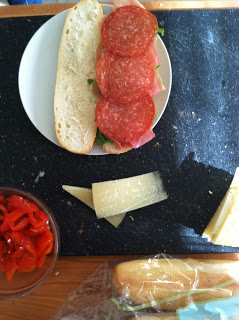 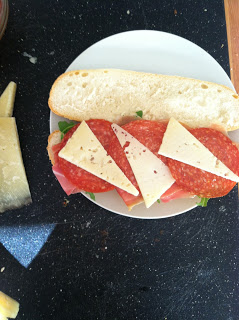 Top with half of the red peppers. 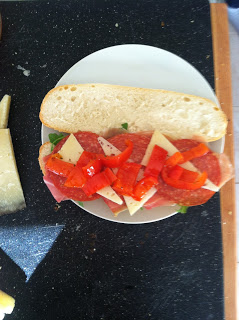 Cut it in half, and you’re done! I was so excited to eat this, that the sandwich was upside down. Oh well. 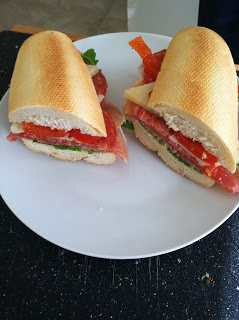 I welcome any suggestions or substitutions you may think up to make this the best sandwich ever. As it is, though, it’s pretty close. Points if you can name the source of this post’s title.
« I’m a blogger now!
Lazy Sunday Lentil Soup »

Easy Vegetarian Tortellini Soup is an incredibly flavorful 3 ingredient weeknight meal that takes only fifteen minutes from start to finish. Easy weeknight meals are the name of the working mom game, and I’ve got a good one: Easy Vegetarian Tortellini Soup! With three ingredients and fifteen minutes, you can get this on the table…